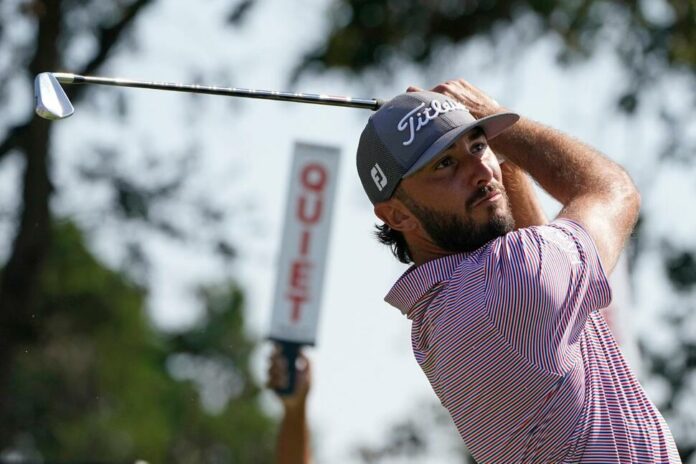 Max Homa captured the Fortinet Championship last year and he’s right back on top of the leaderboard after two round this time.

Homa (pictured), from Valencia and Cal, shot 5-under-par 67 and is tied for the lead with Danny Willett of England midway through the Fortinet Championship on the North Course at Silverado Resort and Spa in Napa.

“The course fits my eyes,” said Homa, who has won four times on the PGA Tour. “I hit a lot of wedges today and I’ve been hitting the wedges really well, so when I get a lot of wedges from fairways like these, I feel like I can attack the pins.

“I drove the ball unbelievable last year, if I remember right. This year, my mid-irons have been really good, but it’s not too far off. My game from last year all the way to now, from this event last year to now feels very similar, which is great. It’s just a testament to my coach, Mark Blackburn. It feels like I’m doing the same stuff, I’m just getting a little better at it, so it feels quite similar. I get on these greens and I feel like I read them really well.

“I’ve got a great support system here. I’ve got friends and family here and a bunch of, you know, people who appreciate I went to school here.”

Homa, who opened with a bogey-free 65, started on the back nine and birdied two of the first three holes before sinking a 15-foot eagle putt at No. 16 and closed with a seven-foot birdie putt at No. 9 to record a 36-hole total of 12-under 132.

Willett, who started with a 68, equaled Homa’s score by collecting four birdies on each nine in a bogey-free, 8-under 64 that included birdies on four of the last six holes.

“Yeah, we kind of got handed a lifeline with the guys leaving (for LIV), which was nice,” said Willett, who hasn’t won in the United States since the 2016 Masters and has won eight times on the DP World Tour. “We kind of had to reassess things and decided we’d press on and play a little bit more this fall over here and really try to get some points up early.

“You know, the rough is hit and miss and with the greens being firm as they are, to go bogey-free is really good. The field game is pretty sharp, the short game’s pretty sharp.”

First-round leader Justin Lower followed his opening 63 with a 71, making a birdie on the last hole, and is two strokes back in a tie for third with Byeong Hun An of South Korea, who holed out from 69 feet for an eagle on the ninth hole and birdied two of the last three holes for a 68.

Sahith Theegala of Chino Hills and Pepperdine birdied two of the last three holes for a 69 and is four shots down in a tie for fifth with nine-time PGA Tour winner Matt Kuchar, who sank a 13-foot eagle putt on the fifth hole in a second 68, and Taylor Moore, who made a 16-foot eagle putt at No. 16 in another second 68.

Ben Martin collected four birdies on the front nine in a 68 and is five down on a tie for eighth with Brian Stuard, who sank a nine-foot eagle putt at No. 16 in a 69, and Robbie Shelton, who made a 14-foot birdie putt on the last hole to cap a 70.