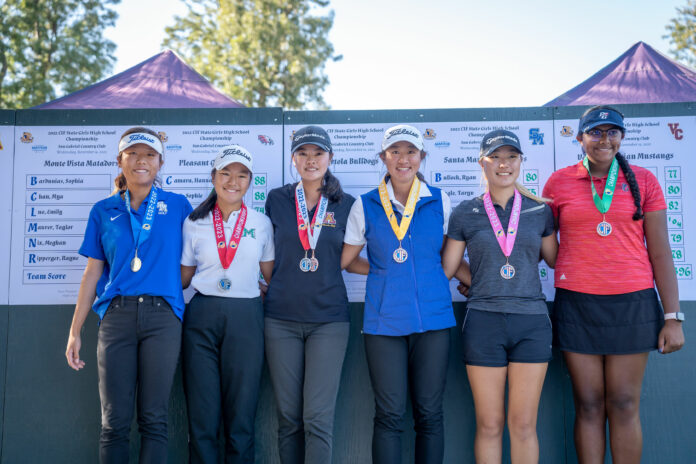 “It is the most successful, magical season I could’ve imagined,” Santa Margarita Coach Jill Hegna said. “It’s pretty special for me personally because I’ve been coaching a long time. It goes to show that you if don’t give up and if you stick with it, positive things will happen. I’m really proud of this team. They’re all so talented.”

Santa Margarita’s Liu (pictured, far left), Taryn Cagle, Leigh Chien, Ryan Bullock, Veronica Man and Angelina Tao posted a combined score of 378, 18-under-par, to win by five strokes over Arcadia, which finished second at 383, followed by Valley Christian of San Jose at 396, Pleasant Grove of Elk Grove at 402, Portola of Irvine at 419 and Monte Vista of Danville at 421.

Liu, who also earned the Orange County Girls’ Athlete of the Week Award, claimed the individual title by three strokes, shooting 5-under-par 67, with Michelle Woo of Mission San Jose second at 70, while Yurang Li of Sunny Hills in Fullerton totaled 72 to tie for third with Erica Lee of Arcadia and Kelsey Kim of Sunny Hills.

“It feels pretty good, especially for California,” said Liu, who has committed to UCLA. “It’s a tough state so I’m feeling pretty good. I think my driving was really good and then the chip I made for eagle. … Everything was working really well.

After making two birdies in the first five holes, Liu took charge on the back nine by adding two more birdies and chipping in for an eagle at No. 13, and didn’t make her only bogey until the final hole.

Previous winners of the CIF Girls’ State Championship include Lizette Salas of Azusa, Andrea Lee of Mira Costa in Manhattan Beach, Jenny Shin of Torrance, Grace Na of Alameda, Alyaa Abdulghany of Corona Del Mar in Newport Beach, Brianna Navarossa of Mater Dei in Santa Ana, Jane Rah of Torrance and Joanne Lee of Carlmont in Belmont the first year the tournament was played in 2004.

Gianna Singh of Pleasant Grove was sixth at 73, while Alaythia Hinds of Pleasant Grove posted a score of 74 to tie for seventh with Jessie Kong of Arcadia, Olivia Duan of Cupertino and Ellie Bushnell of Granite Bay.