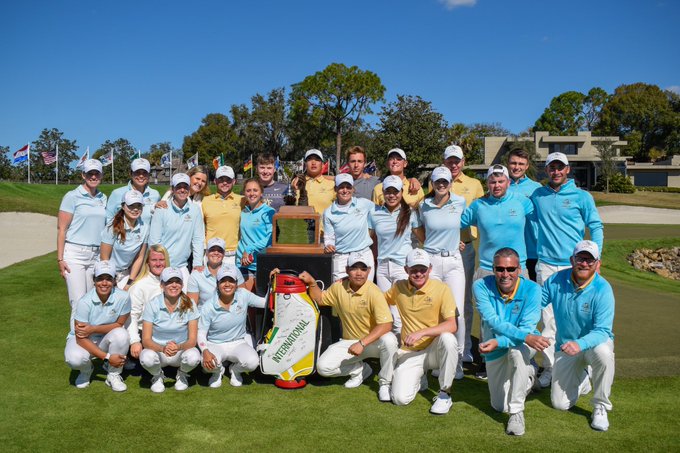 Puwit Anupansuebsai of Thailand and San Diego State won all four of his matches as Team International scored a dominating 40.5-19.5 victory over Team United States in the 24th Arnold Palmer Cup at Bay Hill Club and Lodge in Orlando, Fla.

The Internationals claimed 14 of the 24 points available in singles on the final day to win the event for the second straight time and cut the U.S. lead in the series to 12-11-1 in the three-day competition.

Anupansuebsai defeated Garrett Reband of Oklahoma, 3 and 2, in singles after also winning his matches in mixed fourball, foursomes and mixed foursomes earlier.

Ludvig Aberg of Sweden and Texas Tech, who also went 4-0, scored the winning point for Team International with a 5-and-4 victory over Zach Zediker of Delta State.

Anupansuebsai and John Pak of Florida State were named recipients of the Michael Carter Award, which is presented to the two Arnold Palmer Cup participants who best represent the qualities and ideals of sportsmanship, integrity and upholding of the game.

Matthias Schmid of Germany and Liberty was selected by members of both teams to receive the Arnold Palmer Cup exemption into the 2021 Arnold Palmer Invitational presented by Mastercard.

The Internationals led, 9-3, after the first day of mixed four-ball and after two rounds of foursomes they were ahead, 26.5 to 9.5.

Also playing for the Internationals were Alyaa Abdulghany of Malaysia and USC, Yuxin Li of China and USC, Gabriela Ruffels of Australia and USC, Emma Spitz of Austria and UCLA, and Angelina Ye of China and Stanford, while Sofie Aagard of Sweden and Cal Poly San Luis Obispo was an assistant coach.

On the U.S. team were Ricky Castillo of Yorba Linda and Florida, Allisen Corpuz of Honolulu and USC, Jamie Jacob of Encinitas and Cal State San Marcos and William Mouw of Chino and Pepperdine.