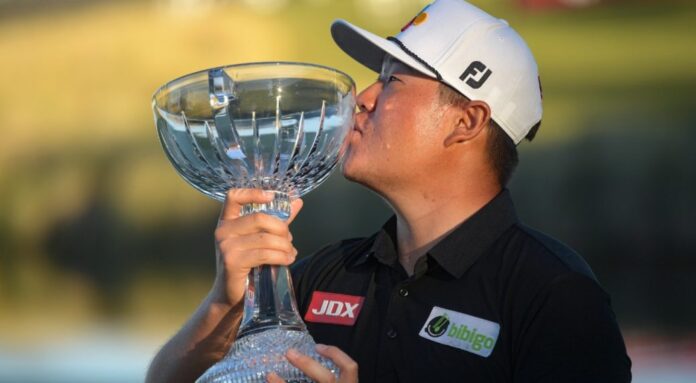 Sungjae Im of South Korea simply went lower than anyone else in the final round of the Shriners Children’s Open.

On a day of low scores, the 23-year-old Im carded a bogey-free, 9-under-par 62 to claim his second PGA Tour victory by four strokes over Matthew Wolff of Agoura Hills at TPC Summerlin in Las Vegas.

“It was very tough to get my first win, but I felt like the second one was harder and harder,” said Im, whose only other title on the circuit came in the 2020 Honda Classic. “But I kept my patience. I tried to stay composed and I’m glad it came.

“The big difference between yesterday (when Im shot 70) and today was that today there was no wind compared to round three, and that made it easier. But again, tee-to-green, driver, irons, putting game, it worked as I wanted it to and it gave me a good result.

“To be honest with you, I didn’t know I birdied five in a row. I was just focused on every shot and trying to not make mistakes.”

Im, who also won the 2019 Genesis Championship in South Korea and had two victories on the Korn Ferry Tour in 2018, blew away the field with nine birdies on his first 12 holes—the last five in a row—before finishing with five straight pars to record a score of 24-under 260.

Wolff, also seeking his second PGA Tour victory, had three birdies on the front nine but couldn’t keep up with Im and closed with a 68.

“This game is like, when I’m in the lead or contention, someone just seems to go off the last day on me,” said Wolff, whose only PGA Tour victory came in the 2019 3M Open and who lost the 2020 Shriners in a playoff with Martin Laird of Scotland.

“But if I keep on putting myself in these positions I know that eventually it’s going to be in my favor and I’m going to win. … (Im) was taking it really deep.”

Marc Leishman of Australia collected nine birdies and a bogey in a 62 to finish five shots back in a tie for third with Rory Sabbatini, who had five early birdies and holed out from 82 feet for an eagle at No. 9 in a 64, and 54-hole leader Adam Schenk, who wound up at 70.

Lanto Griffin birdied the last two holes to cap a bogey-free 66 to wind up six down in a tie for sixth with Adam Hadwin of Canada, who made four birdies on the back nine in a 67.

Hayden Buckley sank an 11-foot eagle putt on the ninth hole and had six birdies to card a bogey-free 63 to finish seven strokes behind in a tie for eighth with Aaron Wise of Lake Elsinore, who had a bogey-free 66, and Harry Hall of Canada, who came in at 68.

Defending champion Martin Laird of Scotland, who also won the Shriners in 2009, tied for 11th after a 66 that included a 16-foot eagle putt at No. 9, eighth-ranked Louis Oosthuizen of South Africa shot 68 to tie for 14th, and reigning Masters champion Hideki Matsuyama of Japan totaled 70 to wind up in a tie for 67th that included ninth-ranked Brooks Koepka, who made a 14-foot eagle putt at No. 16 to salvage a 73.