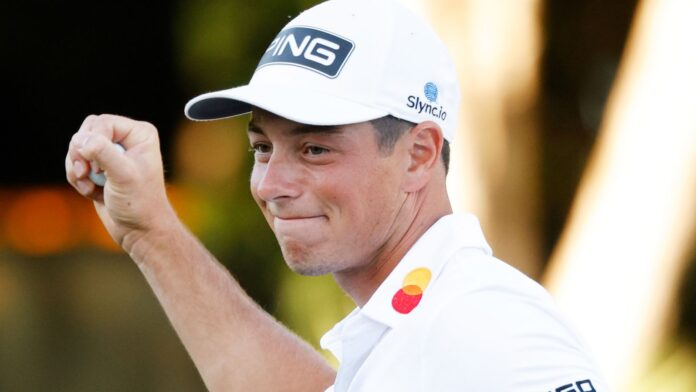 Viktor Hovland of Norway put his game on cruise control.

The 24-year-old Hovland shot 4-under-par 67 and coasted to a four-stroke victory over Carlos Ortiz of Mexico to win the World Wide Technology Championship at Mayakoba for the second straight year at El Camaleon Golf Club in Playa del Carmen, Mexico.

“I have to say this is about the best I’ve ever played,” said Hovland, who also won the 2020 Puerto Rico Open and now has three PGA Tour victories. “I didn’t think I was quite as good today, but I played so well all week..

“I believe this is the best I’ve ever putted and my chipping game was so good, I was hitting it close all the time when I needed to. When you can get up-and-down for birdie or par, it takes all the pressure our long game.

“I hope I can keep doing that moving forward.”

Hovland stayed in control by making four birdies in seven holes through No. 11 and overcame two bogeys coming home with two more birdies to finish with a tournament record score of 23-under 261.

Ortiz, who will defend his Houston Open title this week, collected five birdies in six holes through No. 17 in his 66, while seventh-ranked Justin Thomas was five shots back in third after a 69 and Scottie Scheffler was one more down in fourth after a 66 that included five birdies on the front nine.

“It was great,” said Ortiz, who also won three times on what is now the Korn Ferry Tour. “Even though there’s no full crowds this week, it’s great. I have a lot of friends who came to watch me and I’m just pleased that I was able to give them something to cheer for.

Said Thomas: “I just didn’t drive it well, didn’t get off to a good enough start to really put any pressure on Viktor.”

Matthew Wolff of Agoura Hills, who led after each of the two rounds at 61-68, carded a bogey-free 67 and finished seven strokes behind in a tie for fifth with Joaquin Niemann of Chile, who made two late birdies in a bogey-free 66.

Danny Lee of New Zealand made an eagle and six birdies in a 64 and wound up eight shots back in a tie for seventh with 14th-ranked Abraham Ancer, who made five birdies on the back nine in a 65, Andrew Landry, who had five birdies on the front in a 68, and Sergio Garcia of Spain, who birdied three of the first five holes on his way to a 69.

Maverick McNealy of Portola Valley had an eagle and seven birdies in a 64 to finish in a tie for 11th that included 2019 Mayakoba winner Brendon Todd, who had a 68, and 2012 winner John Huh of Los Angeles and Cal State Northridge tied for 15th after a 69.