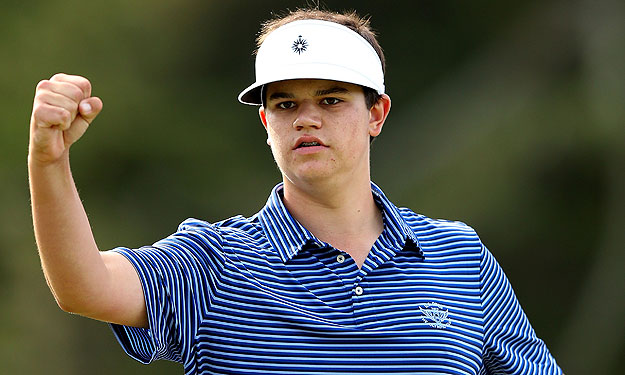 Beau Hossler of Rancho Santa Margarita has never won as a pro, but has put himself in position to end his drought.

The 27-year-old Hossler (pictured) shot 5-under-par 67 and is tied for the lead with J.J. Spaun, Dylan Frittelli of South Africa and Brand Snedeker after three rounds of the 100th Anniversary Valero Texas Open on the Oaks Course at TPC San Antonio in San Antonio, Texas.

“I went to college and I live an hour and 10 minutes away from here,” said Hossler, who played at the University of Texas and is one of the local favorites. “But if I start thinking about that, I’m in big trouble. So I’m just going to go out and play some golf tomorrow and hopefully that’s enough.

“I’ve just got to take it one step at a time tomorrow, try to get the ball in the fairway on the first hole, hit the green and hopefully get a couple things to go my way, play a solid round of golf and I think I’ll be right there.”

Hossler, who lost in a playoff to Ian Poulter of England in the 2018 Houston Open when by making a triple bogey on the first extra hole, birdied three straight holes through No. 16 in the third round to record a 54-hole score of 10-under 206.

“If you told me this Tuesday like, ‘Hey, you’re going to be tied for the lead going into Sunday,’ I would totally take it,” said Spaun, who has won twice on lower tour but not on the PGA Tour. “Yeah, bogey on the last hole, but I think it could have been worse. So I’m not too bummed out about that.

“I pulled my drive into the trees on No. 9 and made a double bogey. I had a shot and I had this huge rock right in front of my ball. Yeah, it was just one of those holes where it could have been a lot better, but ended up being a lot worse.”

Said Snedeker, 42, who has won nine times on the PGA Tour: “I’ve been working hard at it, probably as hard as I ever have in my career. I just haven’t had any success. And the only way you fix that is to go out there and do it, go out there and keep practicing and keep grinding, which I’ve been doing. And you’ve got to relish the challenge when you get them.

“I’ll pull on all those years of experience out here, get ready to relish the challenge. Tomorrow’s not going to be easy, it never is to win a golf tournament. So knowing that going into it hopefully gives me a little leg up.”

Scott Stallings collected three birdies on each nine in a 67 and his one stroke back in fifth after his only bogey on the last hole, while Matt Kuchar, who must win to qualify for his 13th straight Masters next week, made three early birdies could manage on a 72 and is two behind in solo sixth.

Maverick McNealy of Stanford and Portola Valley made five birdies on the front nine en route to a 67 and is three down in a big tie for seventh with Denny McCarthy (68), Si Woo Kim of South Korea (68), Aaron Rai of England (68), Troy Merritt (69), Gary Woodland (72), Brandon Todd (72), Charles Howell III (72) and Kevin Chappell of Fresno and UCLA (73).

Defending champion Jordan Spieth is tied for 63rd after salvaging a 74 with four birdies on the back nine.