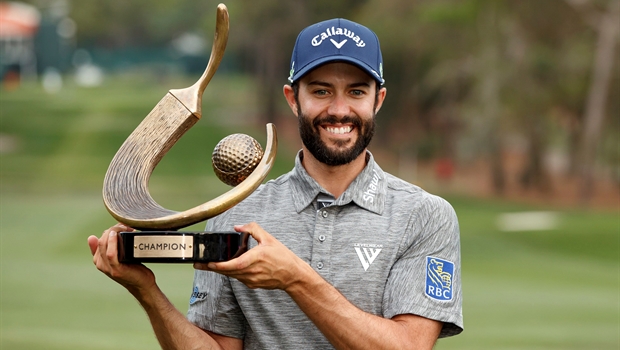 Adam Hadwin of Canada blew his four-stroke lead, falling into a tie for the lead with Patrick Cantlay by hitting his tee shot into the water and making a double-bogey 6 on the 16th hole in the final round of the Valspar Championship.

But when Cantlay stumbled with a bogey on the last hole, Hadwin claimed his first PGA Tour victory by getting up-and-down for par, sinking a two-foot putt to close out an even-par 71 and a one-stroke victory on the Copperhead Course at Innisbrook Resort in Palm Harbor, Fla.

“I was still in the golf tournament,” Hadwin said of his mind-set after the double-bogey. “I was tied for the lead with two holes to go. … You’re never quite sure when you’re going to get the job done.

“I just went there today and stuck to what I do best, just hit some quality golf shots and really made the game super easy outside of hole No. 16. I feel a little fortunate after that hole to be sitting here, but I’ll certainly take it, and I can’t wait for everything that comes with this win.”

Cantlay, the former UCLA star from Los Alamitos who was playing for only the second time in two years after overcoming a back injury, made two bogeys on the last four holes to close with a 68 after two straight 66s.

“It doesn’t really feel like much consolation at the moment,” said Cantlay, who hit into a greenside bunker on the final hole and missed a 15-foot putt that would have forced a playoff.

“I didn’t finish the deal. … I was just trying to catch him. And I caught him, and gave it to him in the end.”

Jim Herman, the first-round leader at 62, finished with a 68 and was two shots back in a tie for third with Dominic Bozzelli, who shot 67, while Tony Finau wound three behind in solo fifth after a bogey-free 64, and defending champion Charl Schwartzel of South Africa was four down in sixth after a 68.

Rookie Wesley Bryan carded a 68 to place in the top 10 for his third straight start, finishing six shots behind in a tie for sixth with Henrik Stenson of Sweden, who had a 70.

John Huh of Alameda and Cal recorded his third 69 of the tournament and was seven behind in a tie for ninth with Russell Henley, who sank a nine-foot birdie putt at No. 18 for a 67.