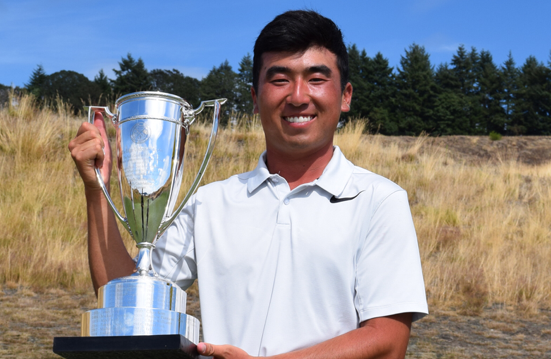 Ghim two-putted for a birdie on the final hole to claim a one-stroke victory over Cameron Champ of Sacramento in the 51st Pacific Coast Amateur on University Place, Wash., where former Longhorn Jordan Spieth captured the 2015 U.S. Open.

“To do it at a public course … Chambers Bay is just incredible,” said Ghim, who grew up playing the public course near his childhood home in Arlington Heights, Ill. “I came from very humble beginnings. I didn’t have a country club or anything like that growing up. To see what I have achieved is amazing.

“This win is going to give me a lot of confidence moving forward. It feels great. I wasn’t even sure if I was going to be playing this week, but I got a nudge from my coach.”

Champ, who plays at Texas A&M, sank a 12-foot eagle putt on the final hole in the group ahead of Ghim to tie for the lead, but Ghim wrapped up the victory with a two-foot putt after hitting his first putt from 40 feet.

Next year, the Pacific Coast Amateur will be played at the Olympic Club in San Francisco.