Spieth’s Open victory is one for the ages 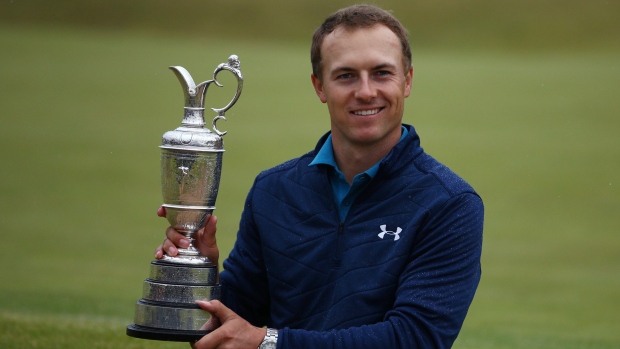 Jordan Spieth almost gave away the 146th Open Championship before taking it by the throat.

Spieth lost what had been a three-stroke lead even though he made a miracle bogey on the 13th hole, before string together a birdie-eagle-birdie-birdie run to beat Matt Kuchar by three shots at Royal Birkdale Golf Club in Southport, England.

Spieth’s closing 1-under-par 69, after he was 4-over after 13 holes, gave him a winning total of 12-under 269 as he joined Jack Nicklaus as the only players to win three legs of the Career Grand Slam before the age of 24, which he will turn on Thursday.

“It was more difficult than it looked,” said Spieth, who will try to complete the Grand Slam in two weeks in the PGA Championship at Quail Hollow in Charlotte, N.C. “It took some resiliency. In my other major victories, I started strong and had to hold on. Here I got behind near the end and had to gets some putts going in, and once I did the roof came off and the can seemed huge.

“ … It feels incredible to be holding (the Claret Jug). This belongs to my caddie, Michael (Greller) as much as it does me because he kept me in it after I got off to a bad start. I drank some wine out of (the Jug) a couple years ago when Zach Johnson won it, and some people said it was bad luck, and I was wondering the way I started today.

Spieth was 4-over for the day and tied for the lead with Kuchar when he pushed his drive well to the right, where it bounced off a spectator’s head and into an unplayable lie on the side of a grassy dune.

Instead of going back to the tee and hitting another drive, Spieth spent about 20 minutes with rules officials try to find his nearest point of relief before hitting his third shot from a corner of the driving range.

Instead, Spieth hit his approach over the dune and close to the green, from where he pitched to within eight feet and made the putt to fall only one stroke behind Kuchar, who also was on his way to a closing 69 in search of his first major victory.

Then Spieth took control by sinking a five-foot birdie putt on the 14th hole to again tie for the lead after nearly holing his tee shot, holed a 48-foot eagle putt to regain the lead as Kooch was making birdie, made a 30-footer for birdie on 16 and added a six-footer on No. 17.

With a two-stroke lead going to the 18th, he closed with a solid par to wrap up his 11th victory on the PGA Tour as Kuchar hit into a greenside bunker and close with a bogey.

“It’s crushing, it hurts,” said Kuchar, 39, who recorded his best major result in his 47th start in the Grand Slam events. “It’s exciting, thrilling to be a part of it and I put up a battle, put up a fight.

“You work so hard to get into this position and to get to where you can taste it with five holes left, it’s tough to take. But I can only control what I do. Jordan is a great champion and to play the way he did in the closing stretch was impressive. You just sit back and tip your hat to him.”

Haotong Li of China shot 63 more than two hours ahead of the leaders and finished six shots back in solo third, while four-time major winner Rory McIlroy of Northern Ireland finished with a 67 and was another stroke behind in a tie for fourth with Rafael Cabrera Bello of Spain, who totaled 68.

Brooks Koepka, who won the U.S. Open last month at Erin Hills, carded a score of 71 and was eight back in a tie for sixth with Matthew Southgate of England (65), Marc Leishman (65) of Australia, Alex Noren of Sweden (67) and Branden Grace of South Africa (70), who shot a major championship record 62 in round three.

Defending champion Henrik Stenson of Sweden shot tied for 11, Masters champion Sergio Garcia of Spain tied for 37th after a 72 and top-ranked Dustin Johnson struggled to a 77 and tied for 54th.