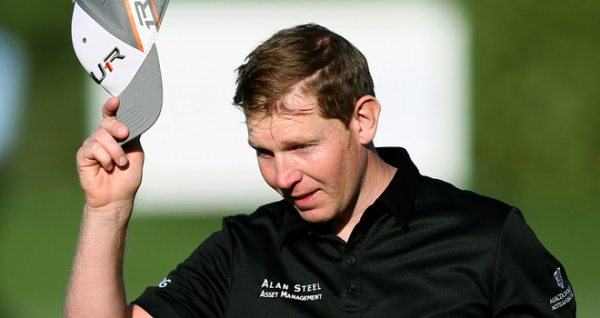 Defending champion Stephen Gallacher of Scotland blistered the back nine en route to a 9-under-par 63 and took a two-stroke lead over Rory McIlroy into the final round of the Omega Dubai Desert Classic at Emirates Golf Club.

The 39-year-old Gallacher, trying to become the first player to successfully defend his title in the 25-year history of the tournament, carded seven birdies and an eagle while playing the back in 9-under 28.

“It was quite a struggle to start with, especially the first three holes,” said Gallacher, who was seven strokes behind McIlroy after playing his first eight holes in 1-over. “I was not quite right, but if you stay patient and keep focused, it’s amazing what this game throws up.

“I hit it stiff on nine and from then on just kept hitting it close, and if I hit it to 30 feet, I holed it. I was just trying to make as many birdies as I could and get a lead because I found the last time it’s easier when you are leading than chasing.

“There’s a lot of golf left to go, but I will certainly be giving it my best shot.”

McIlroy, who was trying to go wire-to-wire after opening with a 63, rallied from an up-and-down start to play his last 12 holes in a bogey-free 2-under and shoot 69.

Brooks Koepka, the young American who opened 69-65, had a 70 and was four strokes back in a tie for third with Thorbjorn Oleson of Denmark, coming off a tie for third in the Commercial Bank Qatar Masters, who shot 65.

Tiger Woods finally found some rhythm with his driver and hit 9-of-14 fairways, but needed 29 putts in a 70 to tie for 37th, and Henrik Stenson of Sweden struggled to a 75 and was tied for 47th.