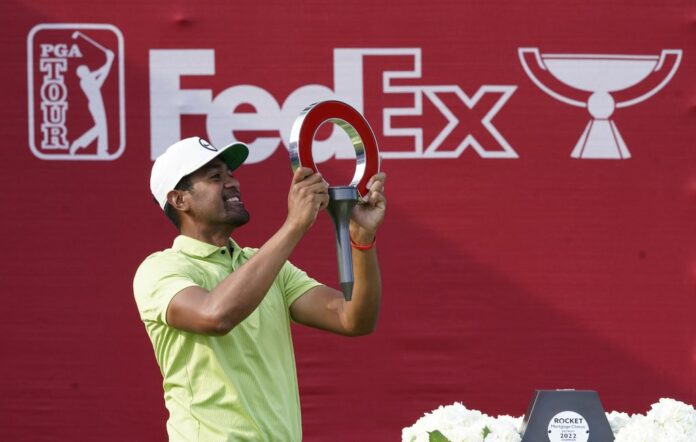 The 32-year-old Finau, who won the 3M Open last week, closed with a 5-under-par 67 to beat fourth-ranked Patrick Cantlay and rookies Taylor Pendrith of Canada and Taylor Young five strokes to capture the Rocket Mortgage Classic at Detroit Golf Club in Detroit, Mich.

Finau became the first player on the PGA Tour to win back-to-back since Cantlay claimed the BMW Championship and the Tour Championship last year to wrap up the FedEx Cup title.

“It feels amazing, just like it felt amazing to win last week,” said Finau, who has claimed four titles on the PGA Tour. “I didn’t finish the way I wanted to last week with a bogey on the last hole, but I did today and showed that I’m a winner, a champion, because I finished strong. Winning by five shots sounds like a lot, but it didn’t feel like it out there and I wasn’t confident I would win until the 18th hole.

“So many people have supported me so that I am able to do this, and I have a great team, including my wife, Alayna, and my agent, who are here today. I’ve been working very hard and it’s great to see that all pay off the way it has the last two weeks. I don’t think it has completely sunk in yet, but I’m going to enjoy this.

“The last couple weeks have changed my life and it’s a great feeling. We have three big tournaments coming up in the playoffs, but I have a chance to win the FedEx Cup, and that’s exciting.”

Finau, who also won the 2016 Puerto Rico Open and the 2019 Northern Trust, followed rounds of 64-66-65 with two birdies on the front nine before making his only bogey at No. 11, but added four birdies on the back nine while recording a tournament record score of 26-under 252.

Cantlay, who is preparing to defend his FedEx Cup title, birdied four of the first five holes and sank a five-foot eagle putt at No. 14 in a 66, while Young posted his fifth runner-up finish this year without winning with four birdies in a 68, and Pendrith made two late birdies to salvage a 72 after rounds of 64-65-66.

“I didn’t get off to a great start, which I did the first three days,” said Pendrith, who was seeking his first PGA Tour victory after winning twice on the PGA Tour Canada in 2019 and had at least a share of the lead after each of the first three rounds this week. “I had a tough time on the greens today and left a lot of putts short. My speed was just off all day until I made a nice birdie putt on No. 15, but it was too little, too late.

“But it was great to play with Tony in the final group for the last two rounds, and overall, I had a very good week. It was a lot of fun, but I just couldn’t keep making birdies the way I had earlier in the week, and on this course, you just have to keep making birdies.”

Said Cantlay, who is from Los Alamitos and UCLA: “I played well and got off to a good start, but I would have had to shoot 62 or 63 to really have a chance and that’s tough. But I had a good week, and my game is in a really nice spot.”

Stephan Jaeger of Germany had three birdies on each nine in a 68 and was six shots behind in solo fifth, followed one more down in sixth by Taylor Moore, who had a tap-in eagle at No. 14 in a 66, while Joohyung Kim of South Korea holed out from 127 yards at No. 10 in a bogey-free 63 and was eight back in seventh.

J.J. Spaun of San Dimas and San Diego State collected four birdies in a 65 and wound up nine strokes behind in a tie for eighth with Wyndham Clark, who birdied sixth of the first seven holes en route to another 65.

Charley Hoffman of Poway and UNLV made three birdies down the stretch in a 67 and finished 10 shots down in a tie for 10th with Matt Wallace of England, who birdied four of the last five holes for a 66, Russell Henley, who birdied his first four holes to kick-start a 68, and Scott Stallings, who had four birdies in a 70.

Defending champion Cam Davis of Australia tied for 14th after a bogey-free 67, former world No. 1 Jason Day of Australia collected seven birdies in a 66 to tie for 17th, 2020-21 Rookie of the Year Will Zalatoris birdied five of the first eight holes in a 65 to tie for 20th, and 2019 Rocket Mortgage champion Nate Lashley tied for 57th following a 71.