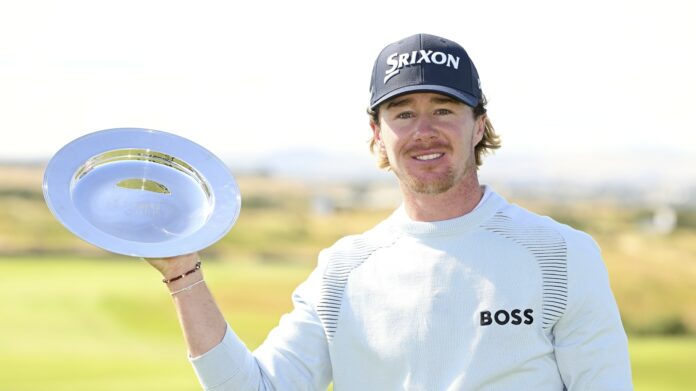 Sean Crocker, who was born in Zimbabwe but grew up in Southern California, has become a winner on the DP European Tour.

The 25-year-old Crocker, of Westlake Village and USC, shot 4-under-par 68 in the final round to hold off Eddie Pepperell of England by one stroke to capture the Hero Open at Fairmont St. Andrews in St. Andrews, Scotland.

“It’s pretty cool but man, because winning a golf tournament is not easy and Eddie did not make that easy for me either,” Crocker told Sky Sports after making crucial par saves on the last two holes. “It was not easy down the stretch. I made a three-putt par on No. 15 and a great par save on the 17th hole. I was so nervous.

“I’ve felt pressure like that before, but it’s my first pro tournament (win) so that putt (his four-footer on the last hole) looked like it was 20 feet. That hole looked like it was half an inch wide, but right off the face I knew it was a well-struck putt and as I looked up and as saw it drop in I was just telling myself, ‘Don’t start crying.’

“It’s awesome and it just shows, you just don’t know what this game is going to bring you.”

Crocker, who was an All-American at USC, opened with a 63 and led virtually from wire-to-wire, made three birdies early on the back nine in the final round and held on with five straight pars to post a winning score of 22-under 266 after recording four scores in the 60s.

Pepperell, who has won four times as a professional, collected four birdies on each nine against a single bogey at No. 9 in a 65 and also carded four scores in the 60s.

“I am proud,” said Pepperell, who won both the Commercial Bank Qatar Masters and the Sky Sports British Masters in 2018. “It was pretty flawless until the ninth hole. Then it felt far from flawless for a few holes and I had to figure it out because there were some tough tee shots coming in, but I just trusted my routines and from the fairway. Coming in, I felt like I played great.

“I haven’t been in position to win for a long, long time but by and large I think I did a good job.”

David Law of Scotland closed with a bogey-free 68 to finish three shots behind in  tie for third with Adrian Otaegui of Spain, who had four birdies on the front nine in another 68, while Oliver Hundeboll of Norway birdied five of the first seven holes and two of the last three in a 67 to wind up four down in a tie fifth with Jens Dantorp of Sweden, who made three late birdies in a 70.

Callum Shinkwin of England had three straight birdies early on the back nine and was one more down in a tie for seventh with Soren Kjeldsen of Norway, who sank a seven-foot eagle putt on the seventh hole in another 66, and Wilco Nienaber of South Africa, who made seven birdies in a 68.

Alvaro Quiros of Spain birdied the last four holes of the front nine in a 67 and finished six strokes behind in a tie for 10th with Oliver Farr of Wales, who holed out from 46 yards for an eagle on the seventh hole in a 70.

Defending champion Grant tied for 41st after a 70.