Mapes Tops Gilligan by 1 in Silverado Am 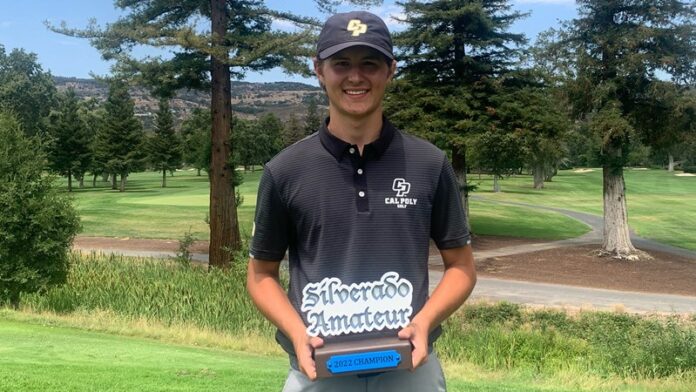 Parker Mapes of Pleasanton made a bogey on the final hole, but held on for the biggest victory of his career by one stroke in the Silverado Amateur Championship on the North Course at Silverado Country Club and Resort in Napa.

“It’s a big amateur, a good field. It’s huge, definitely a big boost for my confidence moving forward into the college season, with fall starting. I’m excited for the season. I’ve just got to keep this momentum going.

“It kept my confidence there, even late in the round. It was just simple. I was making things easy for myself, up until the last hole, and wasn’t really giving anything back. I wasn’t really letting up. I was just hitting fairways and greens, and either making the putt or two-putting.

“I was in the fairway center of 18. And the goal for me was just lay up on the right side and have a little chip in the alleyway there. But I guess I had a little bit of adrenaline. When I missed greens, my chipping was on point too. I was making putts. Everything was working for me. Everything was going my way. Not too many bad breaks.”

The Silverado Amateur is part of the Troon Saguaro Amateur Series.