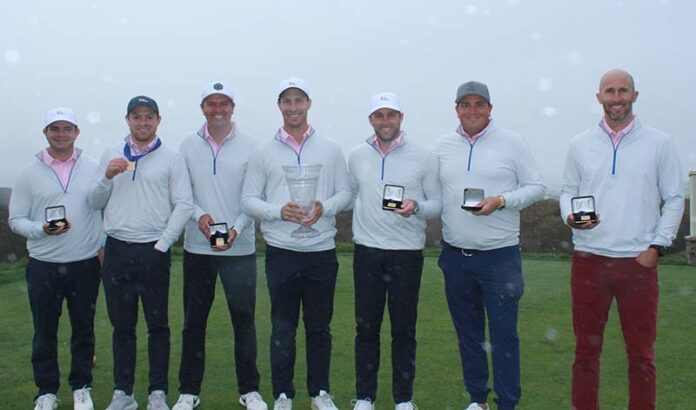 The Farms Golf Club in Rancho Santa Fe claimed the California Scratch League Championship for the second straight year in cold and drizzly weather on The Links at Spanish Bay in Pebble Beach before heavy rain started falling.

The winning team from The Farms uncorked bottles of champagne to celebrate on the final green as rain began to fall, and they wound up wet from both.

“We had a great season, it was a collective team effort,” said captain Jeff Koprivetz of The Farms. “We’re very excited to have managed to go back-to-back. It came down to the last few holes, and fortunately, it went our way.”

Third place went to Corral de Tierra Country Club of Salinas with 29 points, and Virginia Country Club in Long Beach was fourth with 11 points in the four team finals.

Michael Derek finished with a net score of 11-under-par 61 for The Farms in the final round, while Mike Bench wound up at 68, TJ Masters was at 78 and Campell Carter wound up at 68.

Brendan Diette totaled a net 61 for Corral de Tierra Country Club, followed by Evan Peterson at 74 and Brady MacLean at 78.

John DeSantis led Virginia Country Club at 66, while Dennis Martin shot 67 and was followed by Jeffrey Yamaguchi at 83.