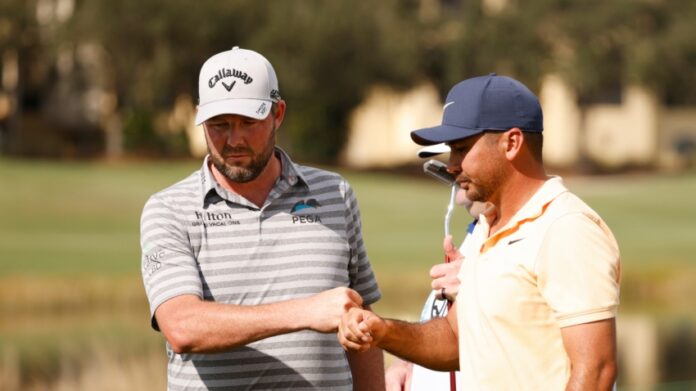 Jason Day sank a 10-foot birdie putt on the last hole to give him and teammate Marc Leishman a one-stroke lead over defending champions Harris English and Matt Kuchar, plus Graeme McDowell of Northern Ireland and Corey Conners of Canada after the first round of the QBE Shootout at Tiburon Golf Club in Naples, Fla.

Leishman chipped in for an eagle on the sixth hole and holed out again for another eagle at No. 10, while Day sank several long putts as the Aussies made six birdies on each nine including the last six in a row, to post a score of 16-under-par 56 under the scramble format.

“We’ve played a lot together in the Presidents Cup and other events in Australia,” said Day, who has 12 victories on the PGA Tour but has been hampered by injuries and last won at the 2018 Wells Fargo Championship.

Said Leishman, who won the Zurich Classic of Australia with Carmeron Smith of Australia in April for one of his six PGA Tour victories: “The (eagle) on 6, I had a pretty good read off Jase. It was a very straightforward chip, but obviously it still takes a little bit of luck for it to actually go in the hole. And then the one on 10, it was on a little knoll, I guess you’ll call it. Jase was in there about 10 feet, so I had a chance to just go straight at it and it went straight in. We get along very well and it was just nice to get off to a good start.”

English and Kuchar, who also won the event in 2013 and 2016 in addition to finishing second three times, collected seven birdies on the front nine and birdied every hole except No. 12 on the back side in their 57.

“Felt like last year all over again,” Kuchar said, recalling their nine-stroke victory in 2020. “This place, I think it’s special to both Harris and me. It’s nice to get off to a good start.”

Added English: “Played really solid, gave ourselves a lot of chances. We didn’t have any eagles today, we were close, but it’s all about making putts. Matt made a couple good 20-, 25-footers and that’s what keeps the round going, that’s what keeps the momentum going. We tend to play the back nine really well here, got off to a good start on 10 and kept it rolling. Kept giving ourselves chances and seeing those putts go in.”

Conners and McDowell matched the 57 by Kuchar and England by making 13 birdies and adding an eagle at No. 17.

“Corey drove the ball fantastic,” McDowell said. “The hardest thing I had to do was try to keep in my rhythm when I followed him down the fairway, he drove it so well. It’s always important just to get two looks the best you can. I just felt like we ham-and-egged well.”

Lexi Thompson, the only woman in the field, made several birdie putts and teamed with long-hitting Bubba Watson for a 59 that tied them for fourth with Kevin Na and Jason Kokrak, who played the last six holes in 7-under, while Hudson Swafford and Brian Harman birdied seven of the last nine holes and are fifth at 60.

Max Homa of Valencia and Kevin Kisner made an eagle at No. 17 to highlight a 61 and are tied for seventh with Matt Jones of Australia and Ryan Palmer, Ian Poulter of England and Charles Howell III, and Sam Burns and Billy Horschel.

Sean O’Hair and Will Zalatoris, the 2020-21 PGA Tour Rookie of the Year, made six straight birdies on the back nine in a 62 and are tied for 11th with K.H. Lee of South Korea and Brandt Snedeker, who had five birdies on each nine.