Dumdumaya, 16, Wins 98th Cal State Fair Am With Birdie on the Final Hole 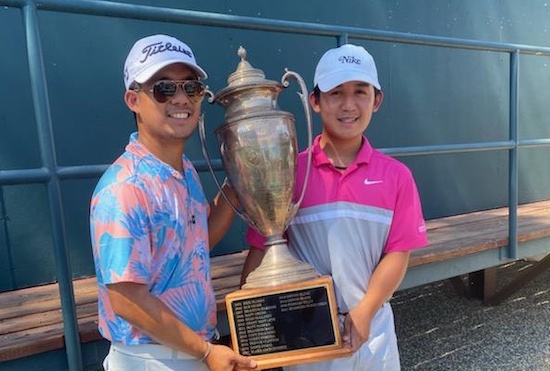 Jaden Dumdumaya of Fairfield became the youngest winner in the 98-year history of the California State Men’s Amateur Championship, and did he it in style.

The 16-year-old Dumdumaya (pictured, right, with his brother and caddie, Vohn), a junior at De La Salle High in Concord, sank a six-foot birdie putt on the final hole to beat Michael Cliff of Fresno in 110-degree weather on the Alister MacKenzie Course at Haggin Oaks Complex in Sacramento.

“It was great hearing the crowd clap and cheer for me and holding that big trophy,” said Dumdumaya, who captured the National Tour Northern California Championship at Silverado and the National Tour Northern California Championship at Stanford earlier this year in addition to winning the Boys 14-15 Division in the Drive, Chip and Putt competition at Augusta National Golf Club in April by making a 15-foot birdie putt on the famed 18th hole.

“I was pretty pumped up after (making birdies on three of the first four holes in the final round). “On the fourth hole, I had 250 yards to the pin for my second shot and 235 to clear the water. I talked it over with my caddie, and we decided to go for it.”

“I love Haggin Oaks because you can hit driver on every hole and that’s the best club in my bag,” said Cliff, who barely missed a 45-foot eagle putt would have forced a playoff and had seven birdies in his bogey-free final round. “I hit it pretty straight and pretty far. I have a lot of wedges into par-4s and long irons into par 5’s.

“I did a pretty good job of not looking at the leaderboard until No. 18. Once I saw that Dumdumaya was 13-under, I knew I needed to take a run at my eagle putt.”