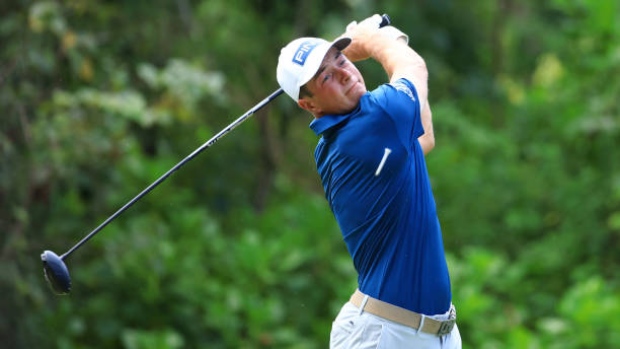 Viktor Hovland of Norway is trying to repeat himself.

Defending champion Hovland birdied the last two holes to cap a bogey-free, 9-under-par 62 and take a two-stroke lead over Talor Gooch to the final round of the World Wide Technology Championship at Mayakoba at El Camaleon Golf Club in Playa del Carmen, Mexico.

Hovland is playing with a driver he borrowed from John Huh because his big stick broke the day before the tournament started.

“I lucky that John had a driver I could borrow and it’s been amazing,” said the 24-year-old Hovland, who also won the 2020 Puerto Rico Open for his first PGA Tour victory. “I took the driver and tested it, and it felt good right away. It hasn’t been an issue.

“I hit driver on the (304-yard) 17th hole and was surprised it went through the green, but I chipped it close and made a birdie, and then was able to make another birdie on the last hole.

“It doesn’t matter if I’m leading or not right now, I’m playing well and have a chance to win.”

Hovland trying to become the first repeat winner at Mayakoba in the tournament that was first played in 2007, made four birdies on the first seven holes and had five more coming hole to record a 54-hole score of 19-under 194.

Gooch, whose only pro victory came in the 2017 News Sentinel Open on what is now the Korn Ferry Tour, holed out from the fairway for an eagle on the 13th hole and added six birdies in his bogey-free 63.

“I played well all day, but the best obviously was making a 25-footer for birdied at 12 and the getting an eagle on the next hole when I was just hoping for a birdie,” said Gooch, who has tied for fourth in the Fortinet Championship and tied for fifth in the Shriners Children’s Open this season. “You never know when you’re going to have a stretch like that.

“I’ve been in the final group a few times and it’s always what you play golf for. Viktor is a cool dude and is playing about as well as anyone in the game right now, so it will be fun.”

Seventh-ranked Justin Thomas birdied four of the fist seven holes to kick-start a bogey-free 64 and is three shots back in third, followed one more down by Carlos Ortiz of Mexico, who is two more down in solo fourth after making three straight birdies through No. 6 in a 67.

Said Thomas: “It’s a fun course to play, because if you’re on your game you can go low. But if you’re not playing well, you can struggle because it’s tight in places. I’ve been working on my putting and I’m rolling it well.”

J.J. Spaun of Los Angeles and San Diego State shot a bogey-free 67 and is six strokes behind in a tie for fifth with Sergio Garcia of Spain, who had a single bogey and also finished at 67.

Andrew Landry made two late birdies in another 67 and is seven shots back in a tie for seventh with Aaron Wise of Lake Elsinore, who wound up at 68, and Scottie Scheffler, who slipped back with a double-bogey 6 at No. 14 in a 70.