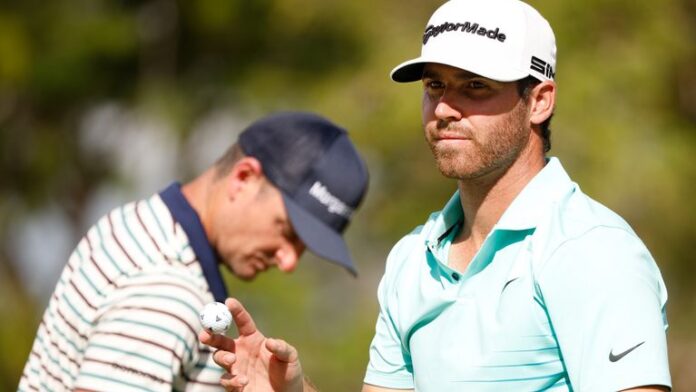 Matthew Wolff stumbled a bit coming home, but remained on top of the leaderboard.

Wolff, the 22-year-old from Agoura Hills who opened with a 61, shot 3-under-par 68 and will take a two-stroke lead over Scottie Scheffler to the third round of the World Wide Technology Championship at Mayakoba at El Camaleon Golf Club in Playa del Carmen, Mexico.

“I just got a couple of bad breaks coming in on 16 and 18, but for the most part I’m really happy with the way I played today,” said Wolff, whose only PGA Tour victory came in the 2019 3M Open. “It’s not always easy to come back after a round like I had yesterday, but I’ll take 3-under, even though it could have been better.

“All parts of my game are working well heading to the weekend, I’ve been keeping the ball in play and have been giving myself a lot of good looks on the greens. I just could have made a few more putts today.”

Wolff made five birdies in the first 10 holes and stretched his lead to four strokes, but took bogeys on the 16th and 18th holes to finish 36 holes at 13-under 129.

Scheffler coming off a 2-0-1 performance including a singles victory over top-ranked Jon Rahm of Spain that helped the U.S. regain the Ryder Cup, birdied five straight holes through No. 8 while finishing a bogey-free 64 on the front nine.

“I wish I could have hit a few more fairways, but other than that I felt I played really well,” said Scheffler, whose only pro victories came in the Nashville Open and the Evans Scholars Invitational on the 2019 Korn Ferry Tour.

“I was still able to put myself in good position on the greens and that’s really important around this place, just keep it in position. I did a good job of that. I had some good looks at birdie, but burned a lot of edges in the first few days, so I need to have a few more putts start falling.”

Defending champion Viktor Hovland of Norway collected five of his eight birdies while finishing a 65 on the front nine and is three shots back in a tie for third with Carlos Ortiz of Mexico, who made four birdies in a row through the fifth hole while capping another 65 on the front nine.

Will Zalatoris, the 2020-21 PGA Tour Rookie of the Year, totaled 69 but missed the cut by two strokes, while former world No. 1 Brooks Koepka, now No. 13, missed the weekend by four shots after a second 71.