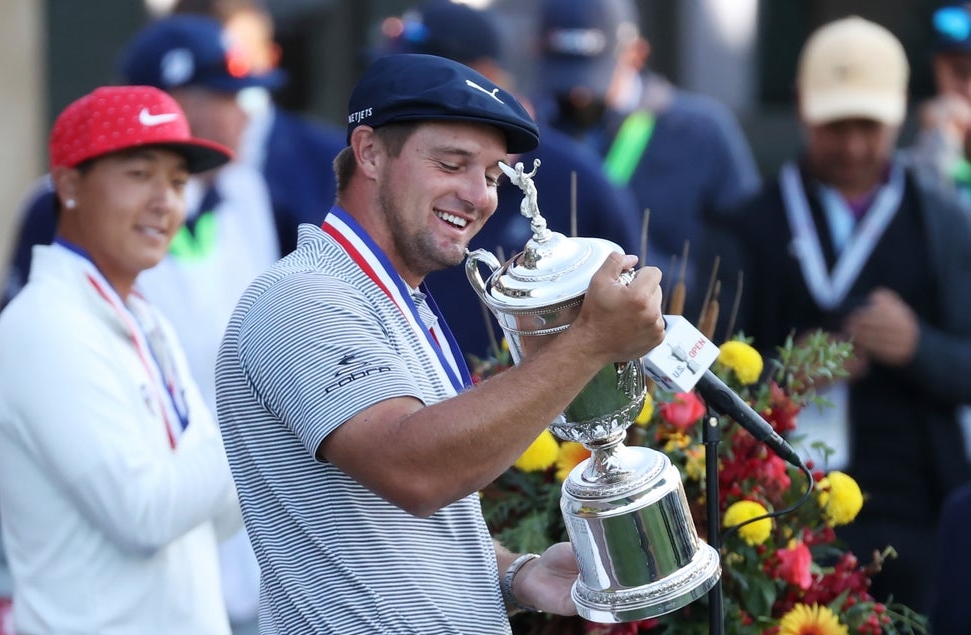 Bryson DeChambeau simply overpowered the field in the 120th United States Open, but he added some finesse as well.

The 27-year-old DeChambeau, who has added 40 pounds of muscle in the last two years, sank a 35-foot eagle putt at No. 9 on his way to a 3-under-par 67 to claim his first major championship by six strokes over Matthew Wolff on the famed West Course at Winged Foot Golf Club in Mamaronek, N.Y.

DeChambeau joined Jack Nicklaus and Tiger Woods as the only players to win the NCAA Division 1 Individual Championship, the U.S. Amateur Championship and the U.S. Open.

“It’s just an honor; I almost don’t know what to say,” said DeChambeau, who is from Clovis in California’s San Joaquin Valley. “Mr. Nicklaus and Tiger have both been great to me, and helped push me to be a better person and player.

“When I made that putt on No. 9, I actually shocked myself, and for the first time I thought this could be a reality, that I would win this thing. But then I told myself that it wasn’t over and to keep my focus on every shot of every hole the rest of the way.

DeChambeau, who entered the week ranked ninth in the world, claimed his seventh PGA Tour victory with a 72-hole score of 6-under 274, the only player in the field to break par for the tournament.

Wolff, from Agoura Hills and the third-round leader by two after a 65, sank a 15-foot eagle putt on top of DeChambeau on the ninth hole to stay one stroke back, but he didn’t make a birdie all day and played the back nine in 4-over to shoot 75.

It was only the second major appearance for Wolff, who tied for fourth in the PGA Championship at TPC Harding Park last month in San Francisco.

“You can’t take anything from Bryson, because obviously he won, but shooting even par (or better) for four rounds at Winged Foot is pretty exceptional,” said Wolff, who helped Oklahoma State win the 2018 NCAA Championship and claimed the 2019 NCAA Division I Individual Championship. “I played really tough all week. I battled hard. Things just didn’t go my way.

“But my first U.S. Open, second place is something to be proud of and hold your head up high for. I really didn’t feel that nervous out there … maybe at the start I did, but at the start I played pretty well. I don’t think it was nerves that were holding me back. I just think it wasn’t meant to be.”

Louis Oosthuizen of South Africa, who won the 2010 Open Championship at St. Andrews, birdied the last hole for a 73 to finish eight shots back in third, followed by Harris English, who made bogeys on three of the last six holes and was one more down in fourth, and seventh-ranked Xander Schauffele of La Jolla and San Diego State, who was 10 behind in fifth after a 74.

Top-ranked Dustin Johnson, the 2016 U.S. Open winner, posted a 70 that was highlighted by his own eagle on the ninth hole, and wound up 11 strokes back in a tie for sixth with Will Zalatoris, the Korn Ferry Tour points leader, who totaled 71.

Tenth-ranked Patrick Reed, the 36-hole leader, tied for 13th after a 74, second-ranked Jon Rahm of Spain closed with a 73 to tie for 23rd, and reigning British Open champion Shane Lowry of Ireland totaled 73 to tie for 43rd.