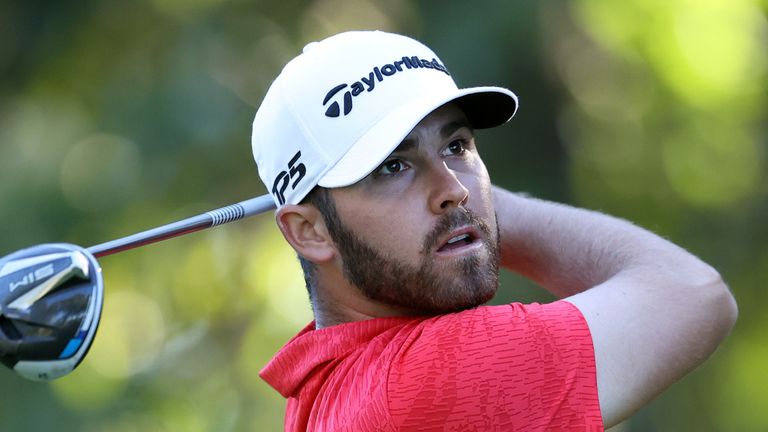 Matthew Wolff of Agoura Hills is playing in only his second major championship, but you would never know it.

The 21-year-old Wolff hit only two fairways but scrambled for a 5-under-par 65 to take a two-stroke lead over Bryson DeChambeau of Clovis to the final round of the 120th U.S. Open on the West Course at Winged Foot Golf Club in Mamaronek, N.Y.

“I was pretty fortunate because I had good lies in the rough and some good numbers to the green,” said Wolff, who won the 2019 3M Open in his third start on the PGA Tour and tied for fourth last month in the PGA Championship. “This rough can be brutal but I was fortunate to get enough club on the ball and minimize my mistakes.

“I’m going to sleep on the lead and I know every stroke counts, and it’s not over until the last putt drops. I’m playing really well, and I’m really confident in my bunker play and my putting. I’m going to have to hit a lot more good shots tomorrow.”

Wolff, who made the clinching putt as Oklahoma State claimed the 2018 NCAA Division I Championship, sank a seven-foot birdie putt in the final hole to finish 54 holes at 5-under 205.

The ninth-ranked DeChambeau climbed to within one stroke of Wolff with birdies on the 16th and 17th holes before finishing with a bogey to shoot 70, and Louis Oosthuizen, who won the 2010 Open Championship at St. Andrews, had three birdies on the back nine in a 68 and is four shots back in solo third.

Wolff, DeChambeau and Oosthuizen are the only players under par for the tournament.

“It was all systems go and I was super confident,” said DeChambeau, who also is seeking his first major victory. “But I lost one of my governors and was struggling to hit the fairways. It says something for my resilience that I was able to shoot 70.

“I’m going to the range right now to fix a few things and I’ll be ready to go tomorrow. I’ll just look at it as another day of golf and go play. That’s what I did when I won the (2015) U.S. Amateur.”

DeChambeau was seen on the range hitting drivers well after dark under the lights.

Seventh-ranked Xander Schauffele of La Jolla and San Diego State sank a 20-foot eagle putt on the ninth hole to highlight a 70 and is one more down in a tie for fourth with Hideki Matsuyama of Japan, who also had a 70, and Harris English, who shot 72, while fourth-ranked Rory McIlroy of Northern Ireland, the 2011 U.S. Open champ, bounced back from a 76 with a 68 and is six strokes behind in a solo seventh.

Two-time major champion Zach Johnson totaled 68 and is another shot back in a tie for eighth with Viktor Hovland of Norway, who had a 70, and Rafa Cabrera Bello of Spain, who finished at 74.

Third-round leader and 10th-ranked Patrick Reed, who was three strokes ahead after a birdie on No. 2, struggled the rest of the way to a 77 and is in a tie for 11th that includes sixth-ranked Webb Simpson, the 2012 U.S. Open champion, who came in with a third straight 71.