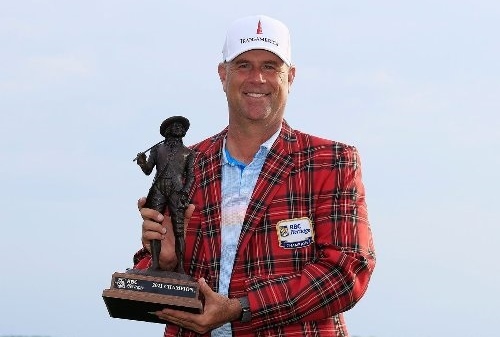 Stewart Cink wasn’t pushed by his pursuers, so he simply went into cruise control.

The 47-year-old Cink closed with a 1-under-par 70 and coasted to a four-stroke victory over Harold Varner III and Emiliano Grillo of Argentina in the RBC Heritage at Harbour Town Golf Links in Hilton Head Island, S.C.

Cink won for the second time this season with his son, Reagan, as his caddie, and they were greeted on the final green by his wife, Lisa, and their other son, Connor—who won the 2013 PNC Father-Son Challenge with his dad.

“I don’t know if I have the world to explain what it means to win again here with Reagan on the bag, with Lisa and Connor also here,” said Cink, who also won this tournament in 2000 and 2004, and now has eight victories on the PGA Tour. “When I won earlier this season, Connor couldn’t be there, but he flew in here today just for this. I means so much to have them all here.

“I just had a blast this week. It was just amazing. I looked at the scoreboard at the turn and saw I had a four-stroke lead. I was playing so well this week, I just felt that nobody else had a chance. My ball-striking was just so good and that just limits high numbers.

“I just love it here and to win again feels amazing.”

Cink, who opened with 63-63 and took a five-shot lead into the final round after a 69, had only one birdie and one bogey through 16 holes before sinking a seven-foot birdie putt on the 17th hole for the clincher, and finished at 19-under 265.

Varner, who had not finished in the top 10 this season, holed a 14-foot birdie putt at No. 18 to cap a 66 to record the best finish of his PGA Tour career, while Grillo had three birdies on the front nine in his 68.

“I feel like I’ve been playing pretty well all year, but just not getting up there on Sundays,” said Varner, whose only pro victory came in the 2016 Australian PGA Championship. “To make a birdie on the last hole was awesome. I’m just super excited.”

Maverick McNealy of Stanford and Portola Valley birdied four of the first five holes to kick-start his 67 and wound up six back in a tie for fourth with Corey Conners of Canada, who had three early birdies in a 68, and Matt Fitzpatrick of England, who made two birdies down the stretch in another 68.

Fourth-ranked Collin Morikawa, the reigning PGA champion from La Canada Flintridge and Cal, made a birdie on the first hole but had only one more in a 72 to finish seven behind in a tie for seventh with Chris Kirk, who birdied three of the first five holes on his way to a 67.

Ninth-ranked Webb Simpson, the defending champion, shot 70 and was eight strokes down in a tie for ninth with reigning Open champion Shane Lowry of Ireland and Cameron Smith of Australia, who both had 66s, and Russell Henley, who had four birdies on the back nine in a 67.

Top-ranked Dustin Johnson had three birdies down the stretch in a 66 to tie for 13th, while eighth-ranked Tyrrell Hatton of England made four straight birdies on the back nine in another 66 to tie for 39th.