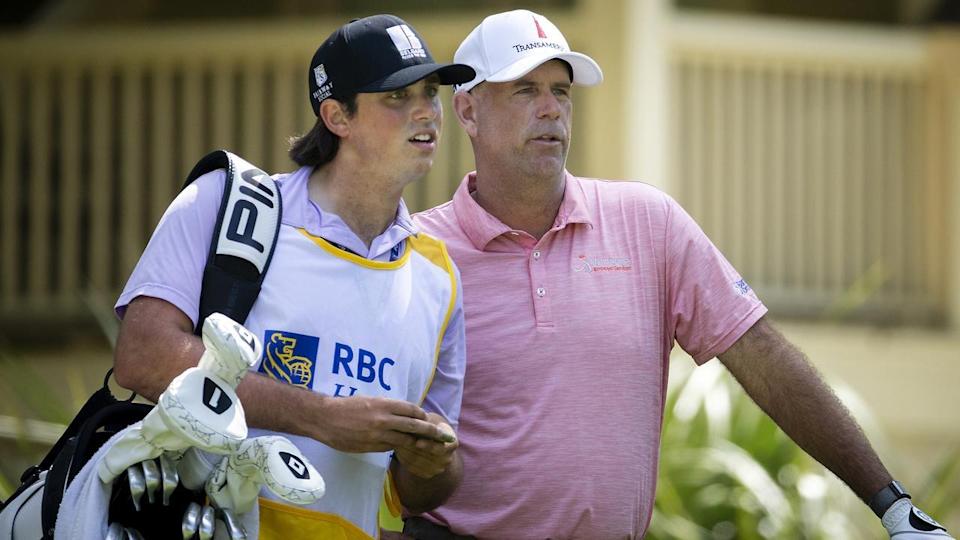 Stewart Cink didn’t have another 63 in him, but he didn’t need it to stay in control.

The 47-year-old Cink, whose son Reagan is his caddie, carded a steady 2-under-par 69 and will take a five-stroke lead over fourth-ranked Collin Morikawa into the final round of the RBC Heritage at Harbour Town Golf Links in Hilton Head Island, S.C.

“It’s hard to compare it with the first two days because they were pretty flawless,” said Cink, whose 14th PGA Tour victory in the Safeway Open early this season was his first since the 2009 Open Championship at Turnberry. “I had the chance to shoot another low round, but I struggled a bit with the putter.

“The course played a little harder today, there was a little more wind. I hit some good putts that didn’t go in after they all went in the first two days. I could have gone lower today, but all in all, it was a success.”

Morikawa, the reigning PGA champion from La Canada Flintridge and Cal, birdied four of the last six holes to cap a 67, while Emiliano Grillo of Argentina shot 69 and is six back in solo third.

“I had a great back nine and I needed it to get somewhat close to have a chance tomorrow,” said Morikawa, 24, who has won four times on the PGA Tour. “I saw a lot of guys bunched together behind Stewart making birdies and knew I needed something. I was chipping and putting well, and it worked out.

“Hopefully, I can put another good 18 holes together tomorrow, but we’re going to probably need some help from Stewart to have a chance.”

Matt Wallace of England posted a bogey-free 65 and is seven down in a tie for fourth with Sungjae Im of South Korea, who made two late birdies in a 69.

Ninth-ranked Webb Simpson, the defending champion, put up a bogey-free 64 and is one more down in a tie for sixth with Matt Fitzpatrick of England, who totaled 68, Harold Varner III, who finished at 69, and Corey Conners of Canada, who came in at 72.

Christiaan Bezuidenhout of South Africa made five straight birdies on the front nine in a 65 and is nine strokes behind in a tie for 10th with Daniel Berger (66), Kevin Streelman (66), Maverick McNealy (66), Charley Hoffman (67), Brian Harman (67) and Billy Horschel (71).

Top-ranked Dustin Johnson is tied for 36th after a 71 and eighth-ranked Tyrrell Hatton of England struggled to a 73 and is tied for 60th.