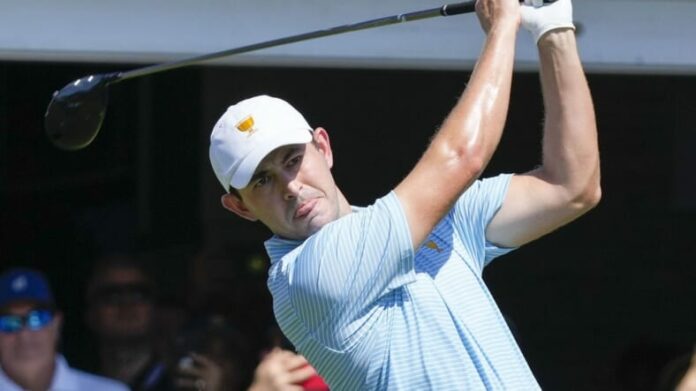 Patrick Cantlay is the unquestionably best player in the field and he showed it in the third round.

The fourth-ranked Cantlay carded a brilliant, 11-under-par 60 and is tied for the lead with 20-year-old rising star Tom Kim of South Korea after three rounds of the 40th version of the Shriners Children’s Open at TPC Summerlin in Las Vegas.

“No lead is safe around here because you can go so low and make so many birdies,” said Cantlay, from Los Alamitos and UCLA, who won the 2017 Shriners for his first PGA Tour victory and has finished second in the tournament twice. “I’ll hit a bunch of drivers and hopefully have a bunch of looks.

“I was really happy with today. I played great. I had a bunch of looks at birdies and made most of them. I took advantage of the par-5s and the drivable par-4, and that’s what you have to do around this place.

“I’ll have the same game plan as the first three days, and it’s going to take a low one again tomorrow. This golf course yields low scores, and I expect the same tomorrow. Everyone will be gunning for me, and I’ve got to shoot a low one.”

Cantlay, who claimed his eighth PGA Tour victory in the BMW Championship during the FedEx Cup Playoffs in August and went 3-1 to help the United States retain the Presidents Cup last  month, missed a 24-foot birdie putt on the 18th hole in an attempt to shoot 59 and break his career-best score by one stroke.

After making birdies on the first four holes and two more on the front nine, Cantlay added five birdies in six holes through No. 17 and recorded a 54-hole score of 19-under 194.

Kim, who claimed his first PGA Tour victory and seventh as a pro in the Wyndham Championship in August and played well with a 2-3 record in the Presidents Cup, caught Cantlay at the top by making five birdies on the last six holes in a bogey-free 66.

“I took care of what I really needed to take care of on this golf course and just need a good round to give myself a chance on Sunday, really because I’m really happy with myself for just keeping it tight,” said Kim, who with a victory would become the first player since Tiger Woods in 1996 win twice on the PGA Tour before turning 21.

“”There’s a lot of golf left to be played. We haven’t run away with it. I have to play well tomorrow. … I would love to have a putt (on the final hole) to win on Sunday. Yeah, it would be great.”

Aaron Rai of England made four straight birdies through No. 17 while carding a bogey-free 62 and is four down in a tie for seventh with J.T. Poston, who posted six birdies on the back nine in a bogey-free 63; Adam Hadwin of Canada, who recorded a bogey-free 65; Si Woo Kim of South Korea, who had five birdies and a single bogey in a 67, and Robby Shelton, who made three birdies down the stretch in a 68.

Hadwin hit the shot of the day when he made a hole-in-one with a pitching wedge from 151 yards on the 15th hole.

“It’s a good pin on the back right,” said Hadwin, whose only PGA Tour victory came in the 2017 Valspar Championship. “I had to take some off a pitching wedge, and just kind of held it up there nicely. It took off on a perfect line. Obviously when it lands, you never quite know, but it was on a perfect line, and I think it was going to be close regardless. So, it’s a bonus to drop in.”

It was Hadwin’s second ace on the PGA Tour, as he also made one four months ago in the Memorial Tournament at Muirfield Golf Club in Dublin, Ohio.