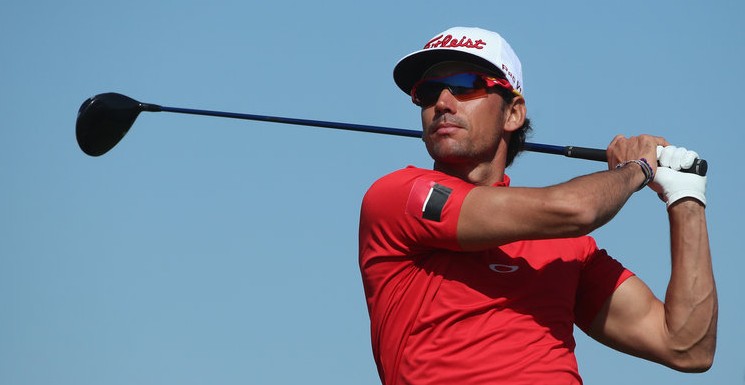 Rafa Cabrera Bello of Spain is playing full-time on the PGA Tour for the first time and seems to be getting the hang of hit.

The 33-year-old Cabrera Bello (pictured) chipped in twice for birdies while shooting 5-under-par 65 in the third round on Saturday and is tied for the lead with Stewart Cink and Ben Crane in the FedEx St. Jude Classic at TPC Southwind in Memphis, Tenn.

“Obviously, those two chip-ins helped,” said Cabrera Bello, who has won twice on the European Tour and five times in his career. “The one on the third hole (from 48 feet) was tough and the one on the fourth (from 33 feet) was tricky.

“I’ve been hitting the ball well and trusting my putting. The difference (on the PGA Tour) is that the courses are much different on the weekend than what you play on Tuesday and Wednesday. It’s always changing.

“It should be firm and fast tomorrow.”

Cabrera Bello, who is playing in his 43rd event on the U.S. circuit without winning, shares the lead with Cink and Crane at 9-under 201 for 54 holes.

Cink, who hasn’t won since the 2009 Open Championship at Turnberry and has been playing through his wife battle with cancer this season, held a two-stroke lead on the front nine before making three bogeys coming home in a 69, while five-time PGA Tour winner Crane carded a bogey-free 68.

Luke List and Chad Campbell recorded 66s and are one stroke behind in a tie for fourth, while Kevin Chappell a 68 and is another shot back in a tie for sixth with Matt Jones of Australia, who shot 69, and 36-hole co-leader Chez Reavie, who had a double bogey and two bogeys on the front nine in a 72.

Defending champion Daniel Berger climbed into contention with a 66 that put him three strokes down in a tie for ninth with David Hearn of Canada, who totaled 67, Whee Kim of South Korea, who recorded a 69, and two-time U.S. Open champion Retief Goosen of South Africa, who came in at 70.

Phil Mickelson, his status for next week’s U.S. Open still up in the air because of his daughter’s high school graduation, finished bogey-double bogey in a 69 that left him four behind in a tie for 13th that included 36-hole leader Charl Schwartzel of South Africa, who stumbled to a 74.