BUNKER MENTALITY: 5 surefire ways to save strokes from the sand 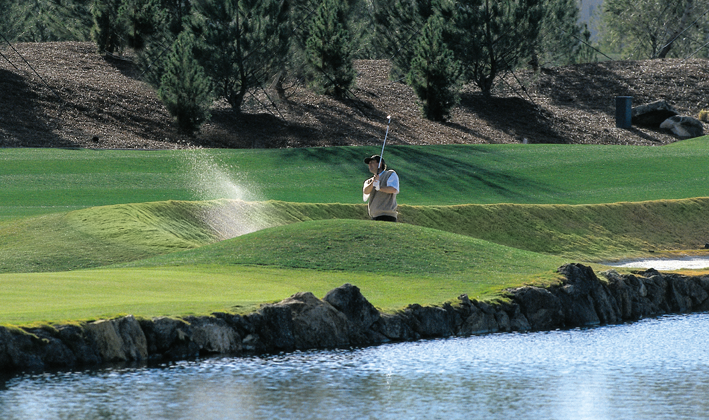 We’re totally familiar with sand in California, Arizona and Nevada … but that comfort level quickly evaporates when we see our golf ball in a bunker. That’s when panic sets in even though pros are constantly telling us that it’s the easiest shot in golf because it’s the only one where you don’t have to hit the ball. That’s easy for them to say because they practice all the time.

Aha! That must be it, or at least it can’t hurt. When was the last time you grabbed a bucket of balls and jumped into the sand trap at your favorite course’s practice area? That’s the only way to get more comfortable with the shot and familiar with the techniques that lead to more up-and-down saves. That doesn’t help you with fairway bunkers but we’ve got that – and more – covered in the following tips. You can thank us later. Or now would be OK, too.

GREENSIDE BUNKERS: The main mistake made by most amateurs is trying to fly the ball the majority of the distance to the hole. A great bunker shot has a particular thumping sound, which is caused by the sole of the club bouncing off the sand. The thump creates the proper angle of attack and amount of sand being taken. The point of entry into the sand should be 4 or 5 inches behind the ball, which allows it to be pushed out by the sand, roll to the hole and produce more consistent results. – Kris Brown, Director of Instruction, Trump National Golf Club, Los Angeles

FAIRWAY BUNKERS: Fairway bunkers bother amateurs more than they should. The best advice I’ve received is to play the shot like you’re hitting off glass. Since coming in too steep would break the glass, you simply want to pick the ball off the top. To do so, put the ball an inch farther back in your stance than normal and choke down on the grip about an inch. Then look at the front edge of the ball and pick it cleanly off the “glass.” This will help you make clean contact every time. – Chris Mayson, Director of Instruction, Maderas Golf Academy

DOWNHILL LIES: The key to hitting off a downhill lie in the bunker is to have your shoulders parallel to the slope and the ball slightly off the higher foot. The mistake commonly made by players is thinking that they need to lift the ball off the lie. Instead, splash the sand onto the green by swinging down the slope. That way the ball will come out with the sand and start rolling toward the hole. – Michelle Dube’, LPGA, Master Teaching Professional, Tijeras Creek Golf Club

BURIED LIES: When your ball is buried in a bunker you want the clubhead to dig into the sand. To do so you must slightly close the clubface to reduce the bounce and position the ball in the middle of your stance. Since you want to strike the sand with a steep motion just behind the ball, the club won’t follow through as with a normal bunker shot. The idea is to get the ball to pop out of the trap and roll to the hole. Since you don’t hit the ball, it’s really one of the easiest shots in golf. – David Emerick, PGA professional, The Crossings at Carlsbad

NOT MUCH GREEN: If the pin is close to where you’re standing in the bunker, use the most lofted club you have, open your stance and make sure the clubface is pointing at the flag. The less green there is to work with the more open your stance should be. Keep a relaxed grip pressure and swing along your foot line. If your golf balls hit the green and won’t stop, continue to lighten the grip pressure until you get the desired results. Repetition and practice will make your short game less problematic. – Brandon Fox, PGA Apprentice, Rancho San Marcos