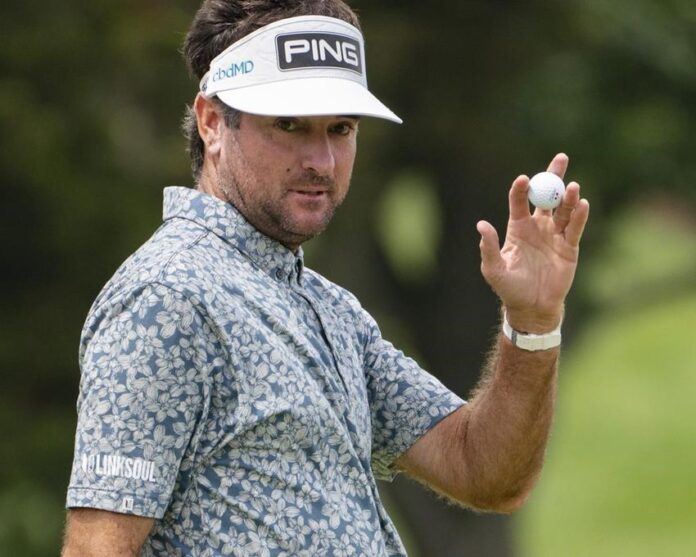 Bubba Watson has won the Travelers Championship three times and is in position to make it four.

Watson missed a five-foot birdie putt on the final hole but still shot 4-under-par 68 in the third round, which was matched by Kramer Hickok, and they are tied for the lead heading to the final day at TPC River Highlands in Cromwell, Conn.

“At this stage of my career, if I have a chance to win I’m going to go for it and not worry about third or fourth place,” said Watson, who won the Travelers in 2010, 2015 and 2018. “I’m not going to change anything and will go for birdies when I have the chance.

“I’ve played this course well over the years and I know what it’s like when the wind kicks up a little bit like this. I’m having fun and playing well, and think I have a good chance to win here again tomorrow.

“I just hope that somebody else doesn’t go crazy.”

Watson made three birdies on the first seven holes and had two more on the last three holes to go with three bogeys on the back nine, finishing 54 holes with a total of 10-under 200.

Hickok, who shared the first round lead at 63, matched Watson’s score by playing the first 14 holes in a flawless 4-under to take the lead before making bogeys on the last two holes in his 68.

“I’m just trying to learn from my past experiences to the best of my ability,” said Hickok, who has won three times as a pro but not on the PGA Tour. “I came up on the Mackenzie Tour and the Korn Ferry Tour and won on both of those. I know there are going to be nerves, but I’m not going to fight them, but just roll with the punches.

“I was in the lead, but made a couple mistakes that led to bogeys on the last two holes. I hit the wrong club on 17, and on 18 it just came down to too much adrenaline, and I hit the ball into a bad spot.

“But I’m happy with where I sit and I’m looking forward to tomorrow.”

Jason Day of Australia, trying to win for the first time since 2018, took the lead with a second-round 62 but battled a stiff back that has bothered him in recent years while shooting 70 and is one stroke back in a tie for third with Cameron Smith of Australia, who collected six birdies in a 66, and Russell Henley, who birdied three holes in the front nine in a 68.

Harris English carded a 67 despite two late bogeys and is two shots back in a tie for sixth with Brice Garnett, who sank a 17-foot birdie putt at No. 15 to highlight a 69, and Kyoung-Hoon Lee of South Korea, who made a three-footer for birdie on the last to cap another 69.

Second-ranked Dustin Johnson, who made the cut on the number, had six birdies in a 65 that was the low score of the day and is three down in a tie for ninth with sixth-ranked Bryson DeChambeau of Clovis (68), first-round co-leader Satoshi Kodaira of Japan (68), Brian Harman (67), Robert Streb (67), Matt Jones of Australia (67), Mark Hubbard (69) and Troy Merritt (70).