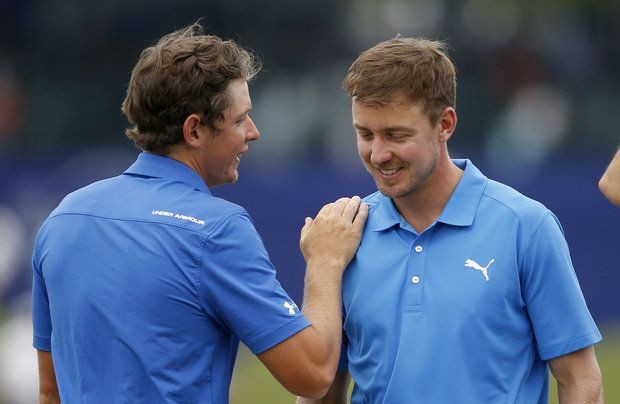 Jonas Blixt of Sweden and Cameron Smith of Australia made two eagles on their front nine and carded a best-ball score of 10-under-par 62 to grab a one-stroke lead over Patrick Reed and Patrick Cantlay halfway through the Zurich Classic of New Orleans at TPC Louisiana in Avondale, La.

Reed and Cantlay, of Los Alamitos and UCLA, collected five birdies on each nine to also shoot 62 and were one shy of the 14-under 132 total recorded by Blixt and Smith.

“I think just having a backup, playing a little bit more aggressively,” said the 23-year-old Smith (pictured left), who has never won as a pro. “And Jonas is putting really good, chipping really good, so you always know he’s going to get up-and-down for par, so just shooting the pins, and it all came off today.”

Added Blixt: “I think we just trust each other’s game and that makes us be able to go at the pins and to get aggressive. I know Cam has my back and I have his. It makes it a lot easier.”

Said Reed: “It’s always nice to get out there and start playing some solid golf, especially when you have a partner like Patrick over here who really never gets in trouble, so it always kind of frees me up and allows me to be aggressive.”

Charlie Wi and K.J. Choi of South Korea totaled 64 and were one stroke back in a tie for third with Troy Merritt and Robert Streb, who had 11 birdies in a 62.

First-round co-leaders Jordan Spieth and Ryan Palmer posted a second straight 66 and were three shots behind in a tie fifth with Kyle Stanley and Ryan Ruffels of Australia (66), Alex Cejka of Germany and Soren Kjeldsen of Denmark (62), Brian Stuard and Chris Stroud (63), Charley Hoffman and Nick Watney (65), and Xander Schauffle and Tag Ridings (64).

The two teams considered the favorites missed the cut, with Ryder Cup teammates Justin Rose of England and Henrik Stenson of Sweden recording a score of 72-68–138 to fall one stroke short, while Jason Day of Australia and Rickie Fowler wound up at 71-68–139 to miss by three.