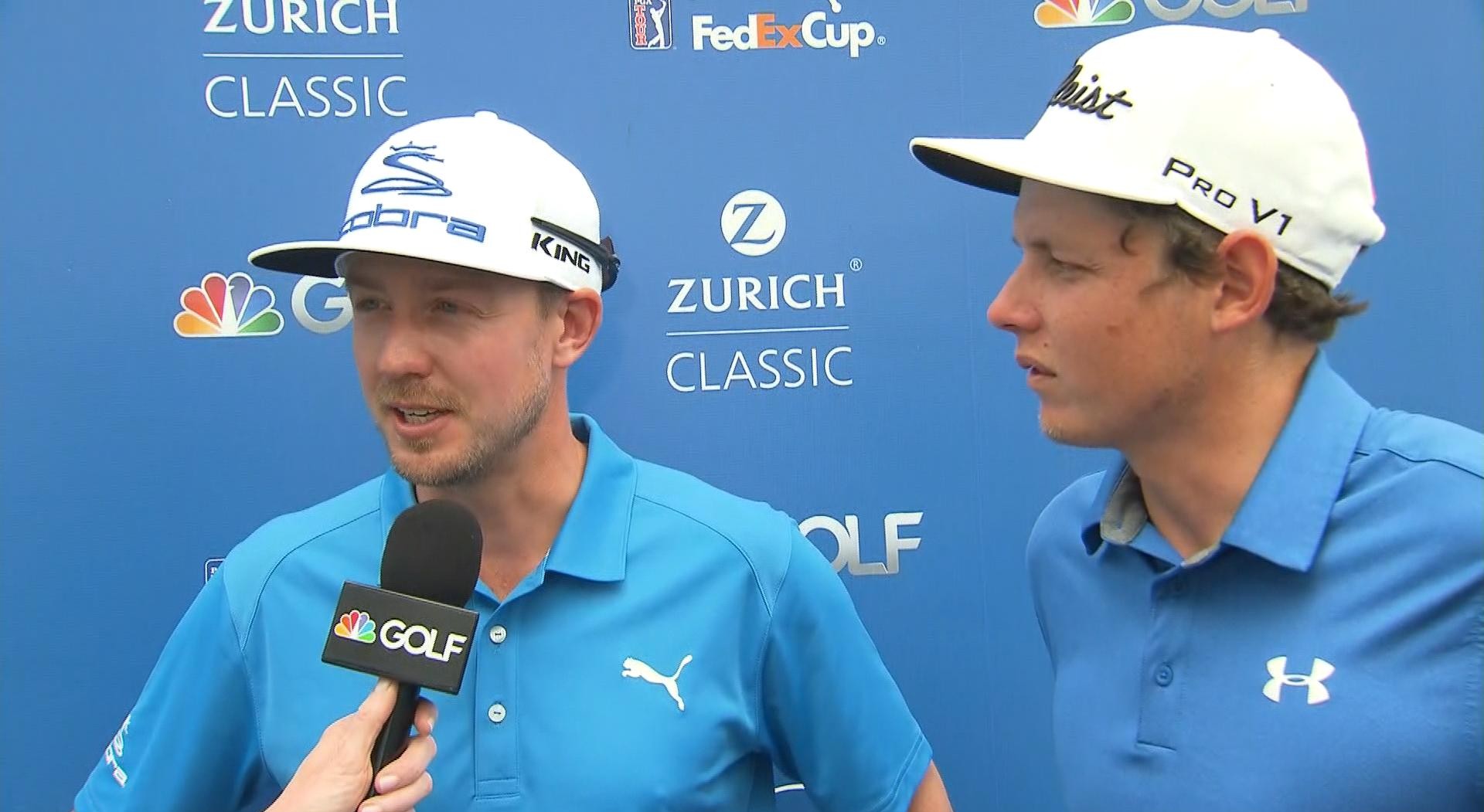 Jonas Blixt of Sweden and Cameron Smith of Australia were among the least touted teams at the start of the Zurich Classic of New Orleans, but the tandem is on top of the leaderboard after three rounds.

Blixt (pictured, left) and Smith carded an alternate-shot score of 4-under-par 68 on Saturday and built a surprising four-stroke lead over Kevin Kisner-Scott Brown and Charley Hoffman-Nick Watney in breezy conditions at TPC Louisiana in Avondale, La.

The 23-year-old Smith, who is winless as a pro, and Blixt, who has two PGA Tour victories, are the only team in the field which has not made a bogey in 54 holes, while posting a score of 19-under 197 in the PGA Tour’s first stroke-play team event since 1981.

“It’s nice to have a teammate who, when I miss, he can get up-and-down to save par of birdie,” said Blixt, who captured the 2012 Frys.com Open and the 2013 Greenbrier Classic.

“We’re very happy with the way we played. Cameron was so good down the stretch, hit so many good shots into the wind. I know I can trust him.”

Said Smith: “Hopefully it doesn’t rain (which is in the forecast) tomorrow. We’ll be out early and the course should be softer and hopefully we play like we did Friday (which was played in the four-ball format, the same as Sunday).

“Tomorrow should be a fun day and hopefully the putts keep going in.”

Kisner and Brown started the third round with nine consecutive pars before collecting six birdies and a single bogey on the back nine to finish with a 67. Hoffman and Watney pulled into a tie for second when Hoffman sank a five-foot birdie putt on the last hole to cap a 69.

“We hit some good shots to give ourselves chances,” Hoffman said. “In this format, even a good par can give you momentum, but it was nice to make a birdie on the last.

“To shoot 69 in these conditions, we’re certainly happy.”

Jordan Spieth and Ryan Palmer had three birdies in a span of five holes through No. 11, but missed several short putts in a 70 that left them five shots behind in solo fourth.

Brian Stuard and Chris Stroud reside another stroke back in fifth after a 71.

Kelly Kraft and Kevin Tway totaled 70 and are seven behind in a tie for sixth with Angel Cabrera and Julian Etulain, both of Argentina, who finished at 71.