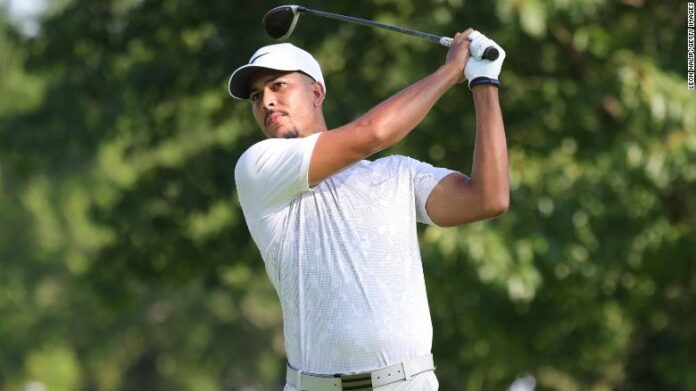 Aaron Beverly of Fairfield was presented with the Charlie Sifford Memorial Exemption by tournament host Tiger Woods and will play in the Genesis Invitational beginning Thursday at Riviera Country Club in Pacific Palisades.

The Charlie Sifford Memorial Exemption is awarded every year for the tournament and represents “the advancement of diversity in the game of golf.”

The 27-year-old Beverly, who played college golf at Sacramento State and graduated in 2017,

“Receiving the Charlie Sifford Memorial Exemption and having the opportunity to play in The Genesis Invitational is a true honor and the opportunity of a lifetime,” said Beverly, who won the Advocates Professional Golf Association Fall Series finale at Wilshire Country in Los Angeles Club in November.

“I am beyond excited to announce that I will be playing in my first PGA Tour event,” Beverly added in an Instagram post. “This is something my dad and I would talk about every single day. I know he’ll be watching over me with the biggest smile on his face.”

Ron Beverly and his wife, Kim, both were diagnosed with cancer during Beverly’s sophomore year at Sacramento State, and she has survived.

“I think, for me, the bigger kind of emotional response was not being able to call my dad and just tell him that, ‘Hey I won a tournament,’”Beverly said of his feelings after he won the APGA event in November.

Beverly, an assistant coach for the Sacramento State men’s golf team and an assistant golf professional at Valley Hi Country Club in Elk Grove, also won a 2020 event in La Quinta on the California State Tour.

“I’m looking forward to welcoming Aaron Beverly to The Genesis Invitational as the 2022 Sifford Exemption,” Woods said. “Like me, Aaron learned the game from his dad. I know Charlie Sifford would be proud of Aaron as he makes his PGA Tour debut at Riviera.”

Sifford became the first Black golfer to win on the PGA Tour when he captured the 1967 Greater Hartford Open Invitational and two years later he won the Los Angeles Open, now the Genesis Invitational.