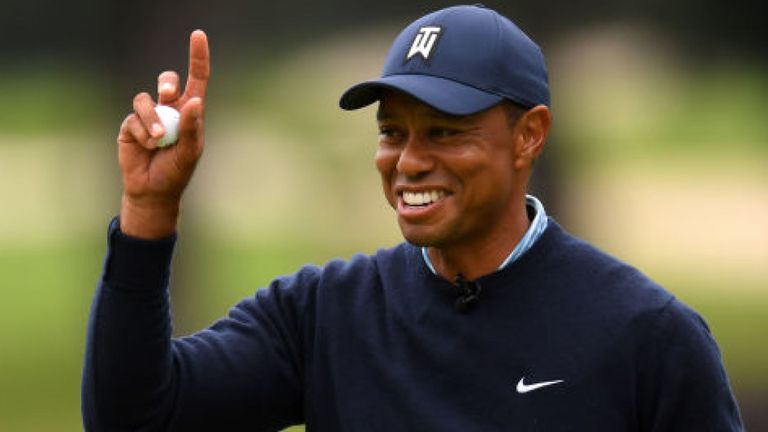 Tiger Woods will be at Riviera Country Club in Pacific Palisades this week for the 94th edition of what is now the Genesis Invitational, but he’s not yet ready to play about a year after the serious rollover accident in his SUV that caused serious.

Woods is the tournament host for the event, which started put as the Los Angeles Open in 1926, benefits his TGR Foundation.

“No, no, no, no,” Woods, who has never won the tournament in which he made his first appearance on the PGA Tour at the age of 16 in 1992. “I’m not at that level (yet). I can’t compete against these guys right now, no. It’s going to take a lot of work to get to where I feel like I can compete at these guys and be at a high level.

“I don’t foresee this leg ever being what it used to be, hence I’ll never have the back what it used to be, and the clock’s ticking. I’m getting older, I’m not getting any younger. All that combined means that a full schedule and a full practice schedule and the recovery that it would take to do that, no, I don’t have any desire to do that. But to ramp up for a few events a year as Mr. (Ben) Hogan did, he did a pretty good job of it, and there’s no reason that I can’t do that and feel ready.”

Even without Woods, the field is loaded with the top 11 players in the World Golf Rankings entered, even though No. 12 Bryson DeChambeau was forced to withdraw on Monday because of hip and hand injuries that have bothered him early this season.

The only player in the top 10 who has won this even previously is No. 6 Dustin Johnson, who claimed the title by five strokes over Scott Brown and Thomas Pieters of Belgium in 2017, and also finished second in 2014 and 2015.

Top-ranked Jon Rahm of Spain lead the way, followed by No. 2 Collin Morikawa of nearby La Canada Flintridge and Cal, No. 3 Patrick Cantlay of Los Alamitos and UCLA, No. 4 Viktor Hovland of Norway, No. 5 Rory McIlroy of Ireland, No. 7 Xander Schauffele of La Jolla and San Diego State, No. 8 Justin Thomas, who was second in 2019, No. 9 Scottie Scheffler, who won last week in Phoenix and No. 10 Hideki Matsuyama, the reigning Masters champion of Japan.

“I’m looking forward to playing at Riviera this coming week,” Cantlay after losing on the third hole of a playoff to Scheffler, who claimed his first PGA Tour victory in the WM Phoenix Open.

Local favorite Max Homa of Valencia and Cal claimed the title last year by turning back Tony Finau with a par on the second playoff hole to capture his second PGA Tour victory after closing with a 5-under-par 66.

“I’ve been watching this tournament my whole life, it’s why I fell in love with golf,” Homa said while choking up afterward. “Wow, I didn’t think it’d be like this. Tiger is another reason I’m into golf. I had good feelings this week, been playing great. City of champions, you know–Dodgers, Lakers and me now, so it’s a weird feeling.”

So, even without Woods, this is a monumental event.

1. Patrick Cantlay, United States – The reigning FedEx Cup champion and PGA Tour Player of the Year has finished in the top-five three times this year after losing in a playoff the Scottie Scheffler last week in the Phoenix Open. Cantlay, who played nearby at UCLA, has finished in the top 20 in each of the last four years at Riviera, including a tie for fourth in 2018 and a tie for 15th last year and in 2019.

2. Jon Rahm, Spain – The top-ranked Rahm finished solo second in the Sentry TOC, tied for third in the Farmers Insurance Open and tied for 10th last week in the WM Phoenix Open by shooting 68-67 on the weekend. He is making his fourth start at Riviera and posted his best result was a tie for fifth last year in addition to tying for ninth in in 2019 and tying for 17th in 2020.

4. Hideki Matsuyama, Japan – The reigning Masters champion is the only two-time winner on the PGA Tour this season, capturing the Zozo and the Sony Open in Hawaii, in addition to tying for sixth in the Fortinet and tying for eighth last week in Phoenix. Matsuyama has three-top-10 finishes at Riviera, a tie for in fourth in 2014, a tie for fifth in 2020 and a tie for ninth in 2019.

5. Xander Schauffele, United States – The Olympic Gold Medalist tied for third last week in Phoenix, finished solo 12th in the Sentry TOC and tied for 18th in the CJ Cup so far this season. Schauffele is making his fifth star at Riviera and has finished in the top 25 each time, including tie for ninth in 2018, ties for 15th in 2019 and last season, and a tie for 23rd in two years ago.

6. Justin Thomas, United States – JT blew a four-stroke lead in the final round a Riviera in 2019, closing with a 75 to wind up solo second, one stroke behind J.B. Holmes, and also tied for ninth the year before, but missed the cut in each of the last two year. So far this season, Thomas has finished third at Mayakoba, tied for fifth in the Sentry TOC and tied for eighth at Phoenix.

7. Collin Morikawa, United States – The two-time major champion is virtually in his backyard at Rivera, but surprisingly has teed it up there only twice, tying for 26th in 2020 and tying for 43rd last season. Morikawa has been in the top five in all three of his starts this season, including solo second at the CJ Cup, a tie for fifth in the Sentry TOC and a tie for seventh in the Zozo.

8. Rory McIlroy, Ireland – Captured the only PGA Tour event he played this season, winning the CJ Cup by one stroke over Collin Morikawa for his 20th victory on the circuit. McIlroy also has finished solo third in the Dubai Desert Classic and tied for 12th in the HSBC Championship on the DP World Tour. He tied for fourth at Riviera in 2019 and tied for fifth the next year.

9. Viktor Hovland, Norway – After winning at Mayakoba, the Hero World Challenge and the Dubai Desert Classic recently, must have been worn out by the long trip back and missed the cut in Phoenix. Hovland played at Riviera for the first time last year and took an instant liking to the classic course, tying for fifth with a closing 67.

10. Cameron Smith, Australia — In addition to claiming his fourth PGA Tour victory in the Sentry Tournament of Champions, Smith also has tied for fourth in the RSM Classic, tied for ninth in the CJ Cup and tied for 15th in the Houston Open and is No. 11 in the world. His best result in six starts at Riviera was solo fourth last year and he also tied for sixth in 2018.

OTHER PLAYERS TO WATCH

1, Sahith Theegala, United States – The rookie from Pepperdine nearly led for three rounds last week before a T-3 at Phoenix after a T-8 at Sanderson Farms. Was T-49 at Riviera last season.

2. Robert MacIntyre, Scotland – Has won twice as a pro in European events, finished T-9 and T-13 in two recent DP World Tour events. MacIntyre is making his debut at Riviera this week.

4. Andrew Putnam, United States – Twice a winner on the Korn Ferry Tour and three times as a pro, was T-6 at Pebble, T-11 in the Shriners. Closed with 68 for a T-32 at Riviera last season.

5. Aaron Rai, England – Six-time winner as a pro around the world finished T-6 at the Farmers, T-15 at Mayakoba, T-16 in the RSM Classic. Rai is making his debut in the Genesis Invitational.