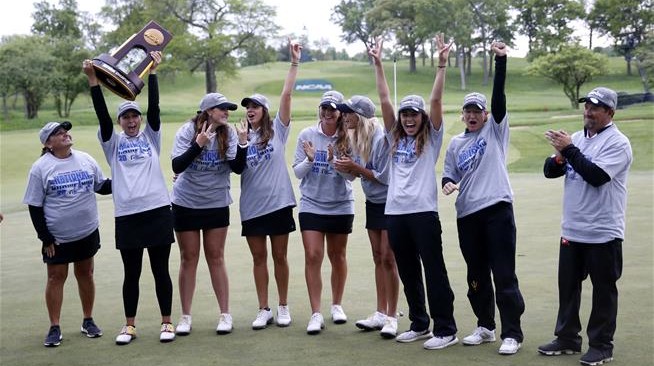 For a while, it appeared Stanford and USC might make it an all-California final in the NCAA Women’s National Championships, but in the end it was Arizona State that upheld the honor of the Pacific 12 Conference.

The Sun Devils defeated Northwestern, 3-1-1, in the match-play final to claim their eighth national championship, and first since 2009, at Rich Harvest Farms in Sugar Grove, Ill.

“I’m so proud of this team and their love for each other, and fighting for each other and working so hard,” ASU Coach Missy-Farr Kaye said.

“It has not been as easy a year as it looks on the outside. We have had a few ups-and- downs, but we’ve hung in tighter. I’m so happy for them that they get to be national champions for the rest of their lives. That to me is the coolest thing.”

Olivia Mehaffey, a freshman from Ireland, got Arizona State its first point in the final with a 4-and-3 victory over Sarah Cho, and Roberta Liti, a junior from Italy, defeated Janet Mao, 5 and 4.

Linnea Strom, a sophomore from Sweden, put the Sun Devils over the top with a 5-and-4 victory over Stephanie Lau.

“I can’t describe this feeling,” Strom said. “This is amazing. … We have been working so hard for this since August. Every practice, every workout. All we have been talking about is this moment right here.

“We wanted to win a national championship, and today we did it.”

Senior Monica Vaughn, who claimed the individual national title for the Sun Devils earlier in the week, halved her match with Hannah Kim, a Northwestern junior from Chula Vista, while Kacie Komoto gave the Wildcats their only point by beating Sofia Zeeb, 3 and 1.

The semifinals were halted by darkness on Tuesday night, when it seemed Stanford and USC were on their way to victories and the final.

However, when play resumed on Wednesday morning, Arizona State rallied to defeat Stanford, 3-2, and Northwestern came back to beat USC, also by 3-2.