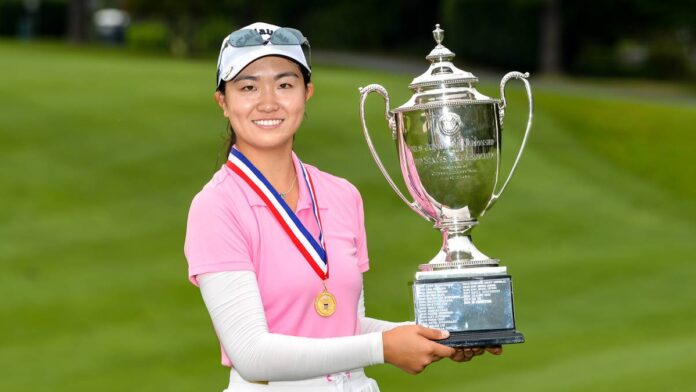 Rose Zhang of Irvine wrapped up her junior career in familiar fashion, with a victory.

The 18-year-old Zhang, the 2020 U.S. Women’s Amateur champion, took charge in the morning round on her way to a 6-and-4 victory over Bailey Davis of White Plains, Md., in scheduled 36-hole final of the 72nd U.S. Girls Junior Amateur Championship at Columbia Country Club in Chevy Chase, Md.

“Coming into the week, everyone just expects you to play well,” said Zhang, who was the medalist in stroke-play qualifying at the beginning of the week with a score 69-62—131, 9-under-par, with her second-round score tying the tournament record shared by Christina Kim (2001), Kimberly Kim (2007) and Lucy Li (2018). “It feels really great that they have really high standards for me, but you really have to know golf is a difficult sport.

“USGA events in general are just, you really need your A game in terms of your patience, your grit and your golf game. Just being able to pull through on such a long week is something really special, and I feel very accomplished in what I did this week.

“In the morning it was very tight. Bailey was making almost every putt she looked at, and I just had to stay patient and keep up with her. That’s what you have to do with your opponent, and I think that I did that pretty well.”

Zhang was even with Davis through 10 holes before taking the lead with a birdie at No. 11 and extended her lead from there, taking a 4-up lead after 18 holes by also winning the Nos. 12, 16 and 18 with birdies.

After Zhang won three of four holes through No. 26 to go 6 up, Davis extended the match with a par at the 31st hole, where Zhang made only her second bogey of the match, but then came a weather delay that lasted for 3 hours and 15 minutes.

When they returned, Zhang finished things off quickly by hitting the flagstick with her approach shot on the 32nd hole and then sinking a five-footer for birdie to end it.

“What are you going to do about it?” asked Davis, who as a finalist earned a spot in next month’s U.S. Women’s Amateur at Westchester Country Club in Rye, N.Y., along with Zhang. “You can’t do anything about it. It would have been amazing if she holed out. Then I knew she was going to make birdie from that because she makes everything.

“This entire week has been unbelievable. I kind of surprised myself getting to this point, but at the same time, I knew what I was capable of, and it feels amazing to have reached that and been able to play to my potential this week.

The 18-year-old Davis was trying to become the first African-American to win a women’s USGA title. An incoming freshman at Tennessee, she is a three-time Maryland high school state champion.

Zhang became the eighth player to win the U.S. Women’s Am and the U.S. Girls Junior Am, but did it in reverse order of the other seven. She earned spots in the 2022 U.S. Women’s Open at Pine Needles and the 2021 Augusta National Women’s Amateur.

In the dramatic semifinal matches, Zhang slipped past Paula Miranda of Mexico by winning the 20th hole with a five-foot par putt, while Davis sank a 20-foot birdie putt at No. 18 to turn back Katie Li of Basking Ridge, N.J., 1 up.