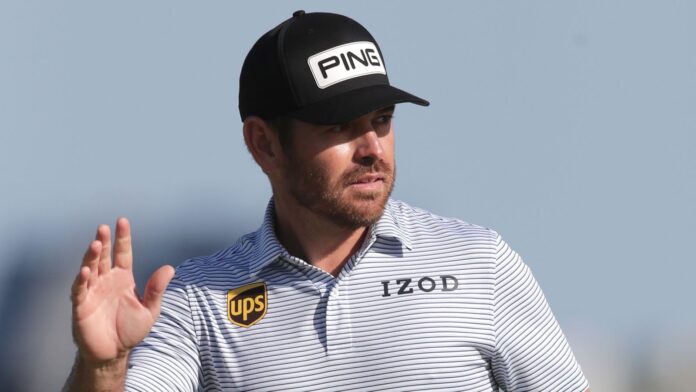 Louis Oosthuizen of South Africa struggled a bit, but still was on top of the leaderboard for the third straight day.

The 38-year-old Ooosthuizen, seeking his second major title, shot 1-under-par 69 and will take a one-stroke lead over fourth-ranked Collin Morikawa to the final round of the 149th Open Championship at Royal St. George’s Golf Club in Sandwich, Kent, England.

“The R&A definitely decided there weren’t going to be any real low scores today,” said Oosthuizen, who has finished second in the last two majors and six times in his career. “The course definitely played more difficult, and the pins were tucked in some tough positions. I hit some bad shots in the middle of the round, but was able to right the ship at the end.

“You can have winning in the back of your mind, but when the round starts you have to forget about that and just go shot-by-shot. That’s what I have to do tomorrow, and sort out those loose swings that I had today.”

Oosthuizen, who won the 2010 Open Championship on the famed Old Course at St. Andrews in Scotland, started round three with seven straight pars before making two birdies on the last three holes of the front nine, but made bogeys at Nos. 11 and 13 plus a birdie at No. 16 to finish 54 holes at 12-under 198.

Morikawa, from La Canada Flintridge and Cal, was tied for the lead at one stage on the back nine while making four birdies and two bogeys in a 68, and will play alongside Oosthuizen in the final twosome for the second straight day in the last round.

“I just got into a good rhythm, kept hitting quality shots in the fairway and gave myself some good looks at birdies,” said Morikawa, 24, who captured the PGA Championship last season. “I just have to go out and do that again tomorrow.

“You can’t change what you do just because it’s the final round of a major, so I will just go through my same routine in the morning because I’ve been successful with it. I have a chance to win, so I’ll just go out and do my best tomorrow, and see what happens.”

Jordan Spieth, who won the 2017 Open Championship at Royal Birkdale in England, also was tied for the lead with Oosthuizen before making three bogeys on the back nine and is three shots back in solo third, while Corey Conners of Canada made four birdies on the back nine in a bogey-free 66 that was the low score of the day and is one more down in a tie for fourth with Scottie Scheffler, who birdied the last hole for a 69.

Second-ranked Jon Rahm of Spain, the U.S. Open champion, made three birdies on the back nine and to shoot 68 and is five strokes behind in a tie for sixth with Mackenzie Hughes of Canada, who birdied three of the last five holes in another 68, and Dylan Frittelli of South Africa, who had three bogeys on the back before a closing birdie left him at 70.

Cameron Smith of Australia birdied three of the first seven holes to kick-start his 68 and is six shots back in a tie for ninth with Justin Harding of South Africa and Marcel Siem of Germany, who both wound up at 70 with birdies on the 18th hole.