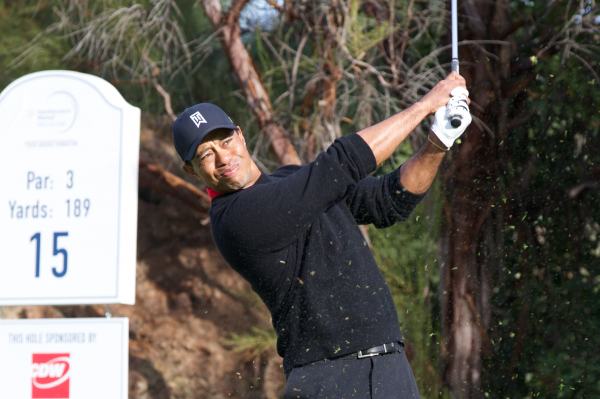 Tiger Woods can’t play in tournaments for a while following back surgery, but he has announced an amateur series called the Tiger Woods Charity Playoffs.

The event will take place over eight courses, including Congressional and Merion, and two in California, Sherwood Country Club in Thousand Oaks and the Resort at Pelican Hill in Newport Beach.

“My foundation provides really awesome experiences, and this event allows all golfers to play cool courses for charity,” Woods said in an email released by the Tiger Woods Foundation.

Cascata Golf Course in Las Vegas will host the first event on May 27, and other courses involved include Trump National in Bedminster Township, N.J.,  Innisbrook Resort in Palm Harbor, Fla., and Myopia Hunt Club in South Hamilton, Mass.

Finalists will receive a two-might stay in December at Four Seasons Resort at Walt Disney World Resort in Lake Buena Vista, Fla.,  two days of golf, a private exhibition with Woods and clubhouse credentials to the World Challenge at Isleworth Country Club in Orlando, Fla., in December.

“We wanted to reach out to a new audience, amateur players, who can play these great courses and raise money for charities,” said Emily Taylor, a spokeswoman for the Tiger Woods Foundation.

The team that raises the most money will earn pro-am spots in three PGA Tour-sanctioned events in 2015.

Two-person teams can enter a regional qualifying tournament for $500 per player on most courses, a $1,000 charity pledge and a goal of fundraising. The teams with the low net and gross scores from each site, along with any team that raises $10,000 or more, qualify for the Charity Playoff Finals on Dec. 1-2.

Proceeds will go to the Tiger Woods Foundation and benefit the Tiger Woods Learning Centers, of which there are three in the Washington, D.C., area, two in Philadelphia, one in Florida and the original in Anaheim.

Also benefiting will be the Earl Woods Scholarship Program.