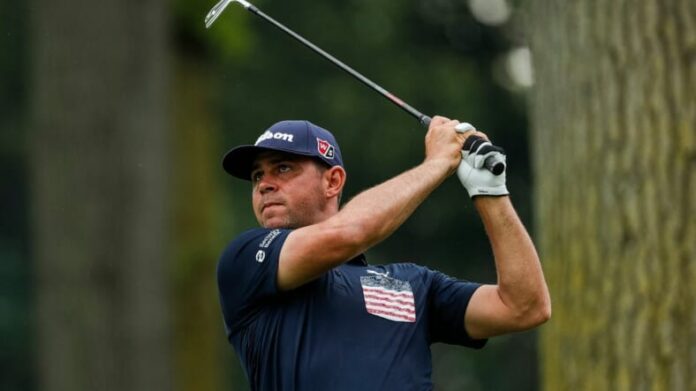 Gary Woodland won the 2019 U.S. Open at Pebble Beach, but hasn’t always played like that same guy since, although this time he did.

The 38-year-old Woodland (pictured) sank a 22-foot birdie putt on the last hole to cap a six-under-par 65 and tie for the lead with Trey Mullinax after the first round of the CJ Cup in South Carolina and Congaree Golf Club in Ridgeland, S.C.

“Playing from the fairway out here is a huge advantage and I was able to attack a little bit from there, as well,” said Woodland, who has won four times on the PGA Tour and six times as a pro, but not since that day three years ago. “All in all, I had all three aspects of driving, ball-striking, putting going on and it was a good day on a great course.

“I was aggressive all day and hit a lot of drivers off the tee, found the fairway and from there hit some good approach shots to give myself plenty of birdie chances, and made a bunch of them. There was no wind, and the golf course is playing firm and fast, so I was able to take advantage of that.”

Woodland, who hit 10-of-14 fairways, collected four birdies on each nine including three in a row to start his round and two straight at the finish, against bogeys on the ninth and 14th holes in his 65.

Mullinax, 30, who has three pro victories including his first on the PGA Tour in the Barbasol Championship earlier this year, matched that with a round that included five of his seven birdies on the front nine against a lone bogey at No. 14.

“I really hit the ball well from tee-to-green, and made some putts,” said Mullinax, who also won on the Korn Ferry Tour in 2016 and 2020. “This is such an awesome golf course, which requires you to hit a lot of different kind of shots. We don’t play this type of golf course all the time and it was really fun.

“You could hit any shot you want and you don’t have to hit the same shot over and over on this course, which kind of brings an artistic feel to it. It was a real treat. I’m really looking forward to playing it for three more days.”

Second-ranked Rory McIlroy of Northern Ireland, the defending champion, made three bogeys in a row through No. 6 en route to a bogey-free 66 and is in a big tie for third with Kurt Kitayama of Chico and UNLV, who opened with three straight birdies; 20-year-old rising star Tom Kim of South Korea, who was tied for the lead until making his only bogey on the last hole; Aaron Wise of Lake Elsinore, who collected seven birdies; Wyndham Clark, who had five birdies on the front nine, and Cam Davis of Australia, who made three birdies on each nine.

Eighth-ranked Justin Thomas, who won the CJ Cup twice when it was played at Jeju Island in South Korea, is tied for 15th at 68, fifth-ranked Jon Rahm of Spain shot 69 and is tied for 26th, ninth-ranked Collin Morikawa of La Canada Flintridge and Cal totaled 70 and is in a tie for 39th that includes 10th-ranked Matt Fitzpatrick of England, and top-ranked Scottie Scheffler is tied for 44th at 71.