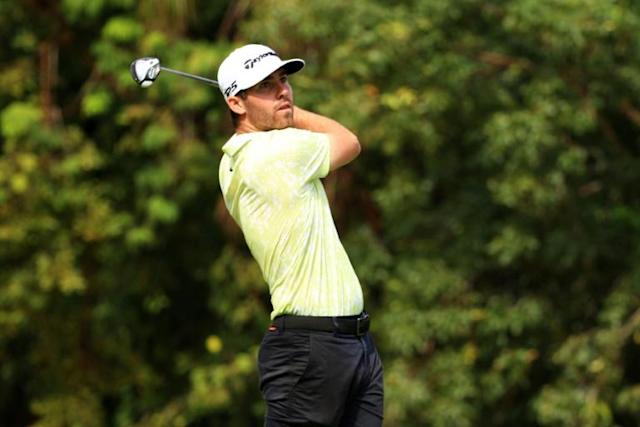 Matthew Wolff came off a three-week break but still was on top of his game.

The 22-year-old Wolff, from Agoura Hills, opened with a bogey-free, 10-under-par 61 to take a two-stroke lead over Aaron Wise of Lake Elsinore in the World Wide Technology Championship at Mayakoba at El Camaleon Golf Course in Playa del Carmen, Mexico.

“I didn’t know it was a course record until after I finished, so that’s cool,” said Wolff, whose only PGA Tour victory came in the 2019 3M Open. “I started out well and then the birdies just kept coming throughout the round. I hit the ball well off the tee and didn’t make any mistakes. I just concentrated on every shot and everything just kind of clicked today.

“I’m really confident in my game right now, and I’ve proven over time when stuff goes well and I am confident, I can kind of carry it over. So right now, my swing feels really good, my head’s in a good spot, and I’m just happy to be out here regardless of the result. I’m just happy.

“It’s not easy, and there’s a lot of ups and downs, but you’ve just got to go with it, and that’s something I’m learning as I’m getting older and being out here longer.”

Wolff, who tied for second in the Shriners Children Open in his last event, collected five birdies on each nine including three on the last five holes as he finished on the front nine.

Wise, 25, who was the 2018 PGA Tour Rookie of the Year after winning the 2016 NCAA individual title and helping Oregon claim the team championship, holed out from the rough for an eagle on No. 5, added seven birdies and a single bogey in his 63.

“I just good have vibes here,” said Wise, who finished second at Mayakoba last year and captured his only PGA Tour victory in the 2018 AT&T Byron Nelson. “I feel like I’ve played well here more years than just last year. Obviously, last year was great and I feel like my game’s in a good spot. Overall, just a lot of really good vibes and a lot of positive energy and hope for a good week here again.

“Yeah, it was great. Made a couple long putts, hit a couple really good iron shots and drove it well. It takes a lot to be 8-under through 10 holes. I was happy to be there, but this course has a pretty tough finish to it. There’s probably three, four really tough holes coming down the back end and one of them got me there with hitting a 3-wood out of play (at No. 16), but was able to save bogey, and then made a nice long putt on 18 for birdie to kind of cap off the round.”

Chris Kirk started on the par-3, 200-yard 10th with a hole in one and added an eagle three holes later to kick-start a 64 and is tied for third with Sergio Garcia of Spain, who played bogey-free, Billy Horschel, who holed out for an eagle at No. 5, and Talor Gooch, who also eagled the fifth hole and saved par after driving into the trees at No. 18.

J.J. Spaun of Los Angeles and San Diego State overcame a double-bogey 6 at No. 16 with eight birdies in a 65 and is tied for seventh with Bill Haas, who played bogey-free, Joel Dahmen, who had four birdies on each nine, and Russell Henley, who made five straight birdies through No. 11.

John Huh, the 2012 Mayakoba champion from Los Angeles and Cal State Northridge, is tied for 11th at 66 after making a hole in one from 151 yards on the eighth hole, while 11th-ranked Tony Finau made three straight birdies on the back nine in a 67 and is in a tie for 20th that includes defending champion Viktor Hovland of Norway.