Wie, Lexi even after three rounds 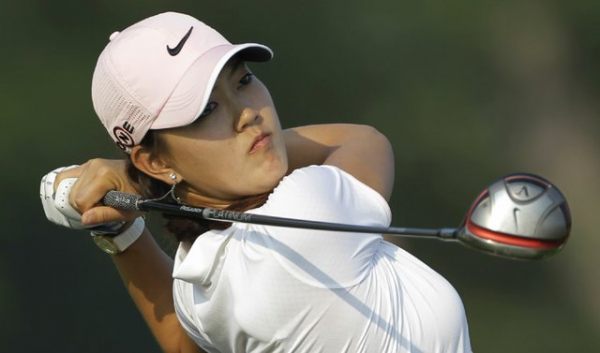 Michelle Wie carded a bogey-free 4-under-par 68 and tied Lexi Thompson for the lead going into the final round of the Kraft Nabisco Championship on the Dinah Shore Tournament Course at Mission Hills Country Club in Rancho Mirage.

The 24-year-old Wie, a graduate of Stanford who has won twice on the LPGA Tour but is seeking her first major title, recorded four birdies on the first 11 holes and added 14 pars in a steady round.

“I had a lot of fun out there today,” said Wie, whose last victory came in the 2010 CN Canadian Women’s Open. “I hit a lot of good shots, but I could have made a few more putts.

“I’m feeling a little old because of Charley (Hull, 18) and Lexi (19). But I appreciate where I am. I’m excited for tomorrow and I’m just going to try to go out and enjoy myself.”

Thompson, who tied for the lead with a 64 in the second round, was ahead by one stroke before three-putting from about 90 feet on the 18th hole to finish off a 69 with her first bogey in 36 holes.

Hull, of England, who captured the UK National Ladies Championship  at Turnberry when she was 9 and claimed the Lalla Meryem Cup last month for her first Ladies European Tour victory, shot 66. She is two shots back in a tie for third with five-time major champion Se Ri Pak of South Korea, who posted a 71.

Catriona Matthew of Scotland finished at 70 to tie for fifth, four strokes back, with Cristie Kerr, who came in with a 71.

Shanshan Feng of China, the first-round leader with a 66, shot 72 and was tied for seventh, five shots off the pace, with Chella Choi of South Korea, who had a 69.

Defending champion Inbee Park of South Korea, No. 1 in the Rolex Women’s World Golf Rankings, struggled again with a 73 and was in a tie for 34th.