Westwood 2-Up on DeChambeau in Players 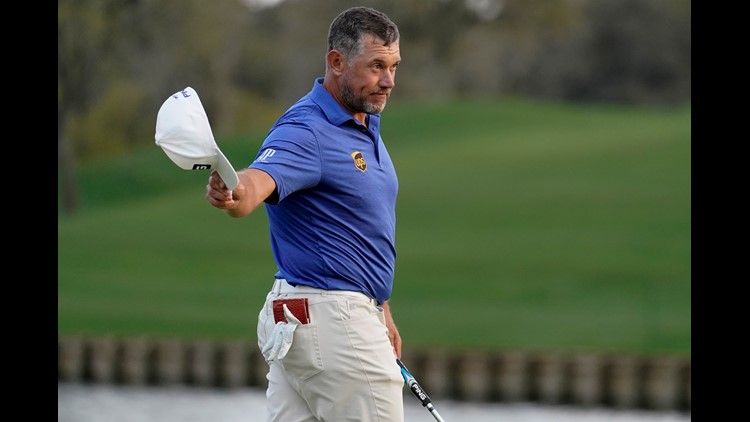 Lee Westwood of England will go head-to-head with Bryson DeChambeau in the final twosome on Sunday for the second straight week and obviously is hoping for a different outcome.

The 47-year-old Westwood shot a bogey-free, 4-under-par 68 and will take a two-stroke lead over the sixth-ranked DeChambeau into the final round of the 47th Players Championship on the Stadium Course at TPC Sawgrass in Ponte Vedra Beach, Fla.

Last week, Westwood led by one going to the final round of the Arnold Palmer, but DeChambeau edged him by a single shot.

“There was nothing I could do but keep hitting good golf shots and giving myself birdie chances,” said Westwood, who started with nine straight pars before making four birdies on the back nine. “I hit a lot of good putts and they didn’t go in, but they I made one on No. 10 and that was kind of a kick in the backside. I’m delighted with the way I played.

“I enjoy playing alongside Bryson. He and his caddie are good company out there, and he plays a game that I enjoy. What’s not to like? I expect to enjoy the experience. It’s the Players Championship and I’ve been coming here years. Everyone wants to put their name on that trophy, and I hope to do it tomorrow.”

Westwood, who has claimed 44 titles as a pro but hasn’t won on the PGA Tour since the 2010 St. Jude Classic, held at least a share of the lead after the second and third rounds, but lost it for a while in the third round until making birdies on the, 12th, 16th and 17th holes. He recorded a 54-hole score of 13-under 203.

DeChambeau, 27, who has claimed eight of his 10 pro victories on the PGA Tour, sank a clutch 15-foot putt for par on the last hole to cap a 67 that included three straight birdies to start the back nine.

“It means everything to make that putt on the final green and get into the last group,” said DeChambeau, the reigning U.S. Open champion from Clovis. “You have to make those difficult putts for par to win tournaments.

“Westy is playing some great golf right now and so am I. It’s an advantage to be out there with the guy you’re trying to catch, because you can see exactly what you have to do. It’s fun playing in the last group and of course I’d love to win again.”

Third-ranked Justin Thomas hit a brilliant approach shot from 204 yards for a tap-in eagle on the 16th hole and posted a bogey-free 64 that was low score of the day and is three shots back in a tie for third with Doug Ghim, who made his only bogey at No. 16 in a 68.

Second-ranked Jon Rahm of Spain collected five of his six birdies on the front nine in a 67 and is four down in a tie for fifth with Paul Casey of England, who sank a 10-foot eagle putt on the second hole in a second straight 67, and Brian Harman, who holed his second shot of the day from 190 yards for an eagle on the first hole of a 69.

Sergio Garcia of Spain and Chris Kirk both totaled 71 and are five strokes behind in a tie for eighth with Matthew Fitzpatrick of England, who came in at 72.

Eighth-ranked Patrick Reed is tied for 22nd after a 72, top-ranked Dustin Johnson shot 73 and is tied for 55th, and fourth-ranked Collin Morikawa of La Canada Flintridge and Cal struggled to a 76 and is tied for 69th—and last among those who made the cut.