Thomas Wins Players by 1 Over Westwood 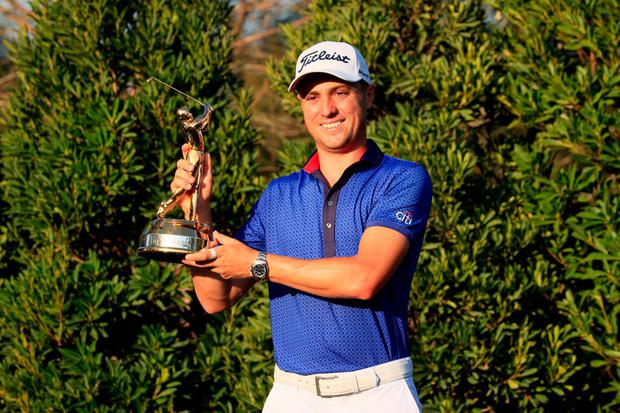 Justin Thomas shifted into overdrive when leaders Lee Westwood of England and Bryson DeChambeau got stuck in neutral.

The 27-year-old Thomas heated up on the back nine and closed with a 4-under-par 68 to win the 47th Players Championship by one stroke over Westwood on the Stadium Course at TPC Sawgrass in Ponte Vedra Beach, Fla.

The third-ranked Thomas trailed by seven strokes after two rounds.

“I’ll tell you what, it’s a lot harder with the fans out here, but we’re so glad to have them back,” said Thomas, who claimed his 14th PGA Tour title, including the 2017 PGA Championship. “It’s crazy what everyone has bee through since the Players last year and to do it in front of fans again was great. Living in Florida for a while, it almost seems like a home win.

“I played one of the best round of my career, but just couldn’t seem to get any putts to go in on the front nine. I just stayed patient because I know what can happen on the back nine here, and then the ball starting going in the hole.

“I’m just so happy to be a Players champion.”

The 2020 Players Championship was halted after one round last year because of the Coronavirus pandemic and the PGA Tour shut down for about three months. Fans were allowed on the course at the Player for one of the few times this season.

Thomas was 1-over through eight holes in the final round before going birdie-birdie-eagle-birdie through the 12th hole, and after making his second bogey at No. 14, he sank a three-foot birdie putt on the 16th that proved to be the winner.

After holing a clutch six-foot par putt on No. 17, a routine par on the last hole gave him a winning score of 14-under 274.

Westwood, who took a two-stroke lead over the sixth-ranked DeChambeau into the final round, made a 15-foot birdie putt on the last hole to take second with a 72, but will remember missing a seven-footer for par on No. 17 that dropped him out of a tie for the lead with Thomas.

DeChambeau, from Clovis in California’s San Joaquin Valley, sank an 11-foot eagle putt on No. 16 but could manage only a 71 a week after beating Westwood by one to win the Arnold Palmer Invitational. He finished two shots back in a tie for third with Brian Harman, who made three birdies coming home in a second straight 69.

Talor Gooch collected seven birdies in a 67 finish one more back in a to tie for fifth with Paul Casey of England, who wound up at 70, while Corey Conners was four down in seventh after making a six-foot eagle putt at No. 11, and reigning Open champion Shane Lowry of Ireland was five behind in eighth after a 68.

Eighth-ranked Patrick Reed tied for 22nd after a 71, fourth-ranked Collin Morikawa of La Canada Flintridge and Cal closed with a 66 to tie for 41st, and top-ranked Dustin Johnson shot 71 to tie for 48th.