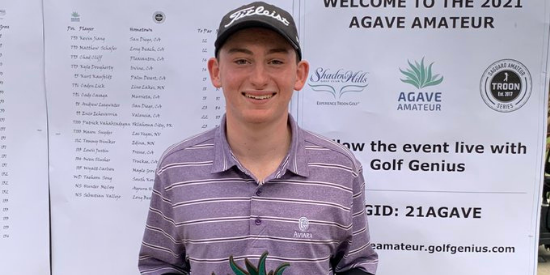 Ryan Voois of Ladera Ranch captured the Agave Amateur Championship by one stroke over Robert Keilich of Newport Beach at Shadow Hills Golf Club in Indio.

Voois, a senior at Tesoro High School in Las Flores in Southern California, made three birdies in his first eight holes of the final round and then finished with 10 consecutive pars to nail down the victory.

“I believe I won because of my tee to green game,” said Voois, who also won the 2021 Inland Empire Amateur. “I was never in trouble off the tee and gave myself a good look at birdie nearly every hole. Coming down the stretch, I was able to hit fairway after fairway and green after green, not giving my opponents any openings.

“I’ve been making some changes to my swing to improve my consistency, and to see results so quickly gives me confidence moving forward and belief in what I am doing. I’m honored to be able to compete against this field against great junior, college, and amateur players, and feel really good about how my game can compete with theirs.”

The Agave Amateur is the eighth event of the Troon Saguaro Amateur Series, and the next event will be the Grapevine Amateur on Dec. 27-30 at on the North Course at Silverado Resort and Spa in Napa.