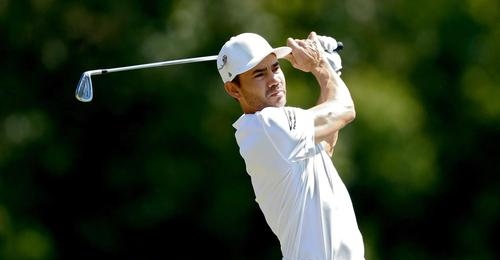 Camilo Villegas is playing on the PGA Tour again and playing well, after a shoulder injury and the death of his 2-year-old-daughter, Mia, from cancer in July.

The 38-year-old Villegas, from Colombia, posted a bogey-free, 6-under-par 64 and is tied for the lead with Matt Wallace of England after the first round of the RSM Classic on the Seaside Course at Sea Island Resort in St. Simons Island, Ga.

The tournament is played on the Seaside Course, which has a par of 72, and the Plantation Course, where par is 72.

“It’s tough to describe, obviously, the love you feel as a parent,” said Villegas (pictured) who has won four times on the PGA Tour but not since the 2014 Wyndham Championship. “And then when you started interacting with her and she’s just giving you so much love and energy, it’s awesome. That’s why I’m actually so thankful about not playing golf during those months. You know, my shoulder (injury) happened for a reason. … It’s not what we wanted, but, hey, I got to enjoy Mia for 22 months.

“ … Got on the range and see a little rainbow out there. I start thinking about Mia and said, ‘Hey, let’s have a good one.’ Nice to have Manny (his brother) on the bag and yes, it was a good ball-striking round, it was a great putting round. I was pretty free all day.”

Villegas started on the front nine with a birdie at No. 10, added three more in a row through No. 17, and two more on the back nine, capped by a 10-foot putt on the ninth hole.

Wallace collected five birdies on the front nine and three more coming home against two bogeys in his 64. His caddie, Dave McNealy, tested positive for the Coronavirus early this week and Wallace tested negative, so he lined up local caddie Jeffrey Cammon.

“(Cammon is) really chill,” said Wallace, 30, who has won four times on the European Tour but has yet to break through on the PGA Tour after joining last season. “He said, ‘What do you want me to say?’ That was the first question. I was like, ‘Listen, Mate, I don’t need anything. I’ll ask you a question and you answer it just with pure facts of what you think.’ It worked well today.”

Cameron Tringale of Mission Viejo birdied three of the last four holes to shoot 5-under-par 67 on the Plantation Course and is tied for third with Rory Sabbatini of Slovakia, who birdied the first four holes, and Peter Malnati, who both totaled 5-under 65 on the Seaside Course.

Patton Kizzire and Robert Streb also finished with 65s on the Seaside Course and are in the tie for third with Keegan Bradley, the 2011 PGA champion, Doug Ghim and Adam Long, who all wound up at 67 on the Plantation Course.