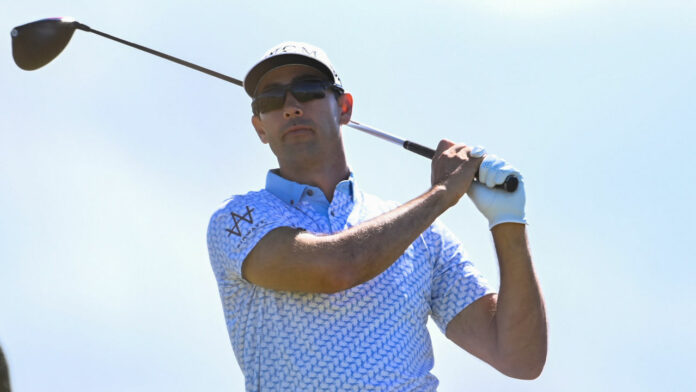 Cameron Tringale was 11 shots worse than in round one, but remained right where he was.

Top-ranked Scottie Scheffler was among the players who missed the cut and headed down the road to the Old Course at St. Andrews to prepare for the 150th Open Championship next week.

“I can’t speak for everyone but my group struggled,” said the 34-year-old Tringale, who is trying to win for the first time in 13 seasons on the PGA Tour. “Long putts, it’s so tough to judge how much the wind is going to hurt, and then you get a putt that’s where the wind is going sideways, and I mean, it might be a ball, two, a cup, even as close as seven or eight feet. It’s really tricky.

“I mean, the course I think is still gettable, honestly, even with all this wind. I just need to play the par 5s a little bit better, and you know, work on those into the wind shots and I should be alright.

“It would mean a whole lot (to win). I haven’t had a professional win on my own, and obviously Scotland is where golf started, so this place is special. Everyone here has appreciation for the game. It’s unique and I would say it would be a good tune-up for St. Andrews.”

After opening with a brilliant, bogey-free 61, began round two at No. 10 and started fast with two early birdies and held a six-shot lead at one time before making four straight bogeys around the turn and had one more birdie and a bogey down the stretch to finish 36 holes at 7-under 133.

Woodland, the 2019 U.S. Open champion, made three straight birdies on his back nine to salvage his own 72 after he had four bogeys in the last five holes to end his first nine, while Ghim had four birdies in five holes on the front nine en route to a 69.

“It’s been a blast,” said Ghim, 26, who is ranked No. 204 in the world and is seeking his first pro victory. “I was just telling my caddie that I think this is my favorite place in the world to play golf. It makes you think. There are some shots that you have to play like in America, and some shots that I would never consider playing back there.”

Woodland, who got some help recently with strong words of advice from his former instructor, Butch Harmon, in Las Vegas, said: “I needed it. He gets me in the right frame of mind.”

Jordan L. Smith of England made a hole in one from 193 yards at No. 17 on his way to a 69 and is four shots behind in a tie for fourth with 2021 Olympic Gold Medalist Xander Schauffele of La Jolla and San Diego State, who sank a 13-foot eagle putt at No. 10 in a 65, 10th-ranked Matt Fitzpatrick, the U.S. Open champion from England, who had a 66, and Kurt Kitayama of Chico and UNLV, who wound up at 71.

Rickie Fowler of Murrieta made two birdies on each nine in a second straight 69 and is five down in a tie for eighth with Joaquin Niemann of Chile and Rafa Cabrera Bello of Spain, who both also finished with 69s, Tyrrell Hatton of England, who had a 70, and Rasmus Hojgaard of Denmark, who came in at 72.

Scheffler finished at 73-72—145 and missed the cut by two strokes along with fourth-ranked Collin Morikawa of La Canada Flintridge and Cal, who wound up at 71-74—145, while eighth-ranked Viktor Hovland of Norway came in at 74-73—147 and missed by four shots.