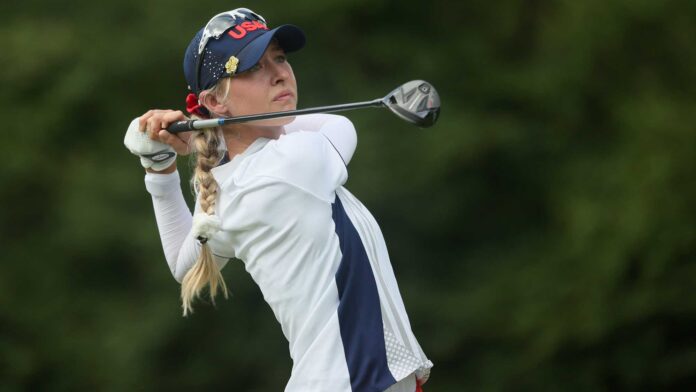 Nelly Korda of the United States showed why she is No. 1 in the Rolex Women’s World Golf Rankings.

Korda played flawlessly until making a double-bogey 6 on the last hole but still carded a 9-under-par 62 to take a four-stroke lead over Emily Kristine Pederson and Nanna Koertz Madsen, both of Norway, and Aditi Ashok of India after two rounds of the 2020-21 Olympic Games Women’s Golf Tournament on the East Course at Kasumigaseki Country Club in Saitama, Japan.

“I made a stupid decision on the 18th hole to hit driver and then after laying up hit a poor chip shot with a wedge,” said Kordia, who recently claimed her first major title in the Women’s PGA Championship. “I played it safe on the second shot and still made double bogey, but who knows what would have happened if I hit a risky shot with water there on my second, but that’s just golf.

“I played really solid, although I didn’t make any putts in the first few holes, but then they all started going in. I didn’t look at the scoreboard, but just kept giving myself good looks and making a lot of them. I just felt really good out there.”

kora, who has six victories on the PGA Tour, collected nine birdies and an eagle on the sixth hole before hitting her drive on the last hole behind and tree, laying up and failing to get up-and-down for bogey and finished 36 holes at 13-under 129.

Pederson eagled the sixth hole and had eight birdies in a 63, while Madsen birdied four of the first seven holes in a 67, and Ashok birdied three of the last four holes in a bogey-free 66.

“I think my putting was good today, but my putting and short game have always been the strength of my game,” said Ashok, who has won three times on the Ladies European Tour. “When you are short hitter, you have to find a way to get ball into the hole. I’m just happy to be playing good golf and representing India well in the Olympic Games.

“I’m sure people are just waking up back home to the news there and seeing what happened. People in our country are so used to seeing men doing well in golf, but not so much the women. It was great being tied for the lead, even if it was just for a little while. I’m happy that I’ve been able to do that this week.”

First-round leader Madelene Swanstrom of Sweden birdied the first two holes to kick-start a 68 and is five shots back in solo fifth, while second-ranked Jinx Young Ko of South Korea made three birdies on each nine in a 67 and is six down in a tie for sixth Monee Inami of Japan, who eagled the sixth hole and added five birdies in a 65.

Hannah Green of Australia made four bridies on each nine in another 65 and is one more down in solo eighth, while Lydia Ko of New Zealand, who claimed the Silver Medal in Rio de Janeiro in 2016, made bogeys on the last two holes for a 67 and is eight back in a tie for ninth with Xiyu Lin of China, who came in at 66 with the help of an eagle on the eighth hole.

Third-ranked Inbee Park of South Korea, who won the 2016 Gold Medal in Rio, posted a 70 and is in a tie for 24th that includes eighth-ranked Minjee Lee of Australia, while seventh-ranked Brooke Henderson of Canada and 10th-ranked Yuka Saso of the Philippines are in a tie for 34th after 68s, and Lexi Thompson of the U.S. is tied for 39th following a 71.