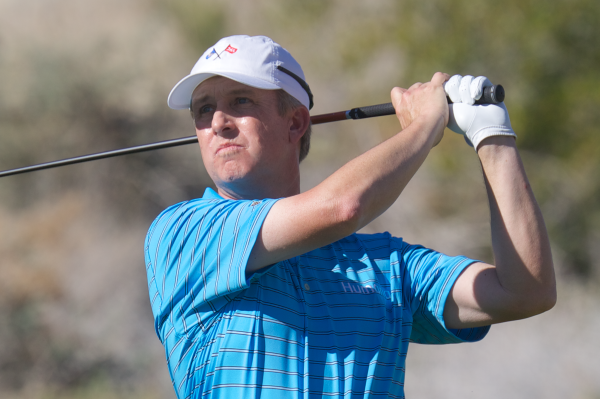 David Toms carded a 5-under-par 65 and was tied for the lead with Chad Campbell, Chris Stroud and Hideki Matsuyama of Japan heading to the final round of the Crowne Plaza Invitational at Colonial Country Club in Fort Worth, Texas.

The 47-year-old Toms, who has won 13 times on the PGA Tour, but not since the 2011 Colonial, recorded six birdies and a single bogey at No. 3 in the third round.

“It was a good, positive day,” said Toms, who captured the 2001 PGA Championship at Atlanta Athletic Club. “I needed a good round to get into contention, and that’s what I’ve done, so I look forward to (Sunday).

“If the conditions remain the same and par is a good score, whoever can make a few birdies will have a good chance to win.”

The 21-year-old Matsuyama, who has won five times in Japan and is looking for his breakthrough on the PGA Tour, carded three birdies on each nine in a bogey-free 64.

Campbell, who has won four times on the PGA Tour but not since the 2007 Viking Classic, held sole possession of the lead before making a bogey on the 13th hole while shooting 68, and Stroud, seeking his first victory on the circuit, earned his share of the lead with a 15-foot birdie putt on the 18th hole to complete a 69.

Kevin Chappell of Fresno and UCLA holed a 48-foot bunker shot for eagle on the 11th hole en route to a 63 that was the low round of the day, and was one shot back in a tie for fifth with FedEx Cup leader Jimmy Walker, who finished at 69, Tim Clark of South Africa, who also had a 69, Mark Leishman of Australia, who shot 67, Brian Harman, who posted a 68, and Kris Kirk, who came in at 67.

Adam Scott of Australia, playing for the first time as the No. 1 player in the world, shot a bogey-free 66 and was two shots back in a tie for 11th that included PGA champion Jason Dufner, who posted a second straight 69.