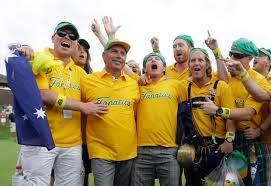 Fred Couples, captain of the United States team in the Presidents Cup, joins fans of the International team for some fun on the 18th green at Muirfield Village Golf Club in Dublin, Ohio, on the final day of the competition. Couples guided the Americans to victory over the Internationals for the third consecutive time, 18 1/2 to 15 1/2, but said he is not interested in returning for the matches in 2015 at Jack Nicklaus Golf Club Korea in Incheon, South Korea. “A three-peat is good enough for me,” Couples said.