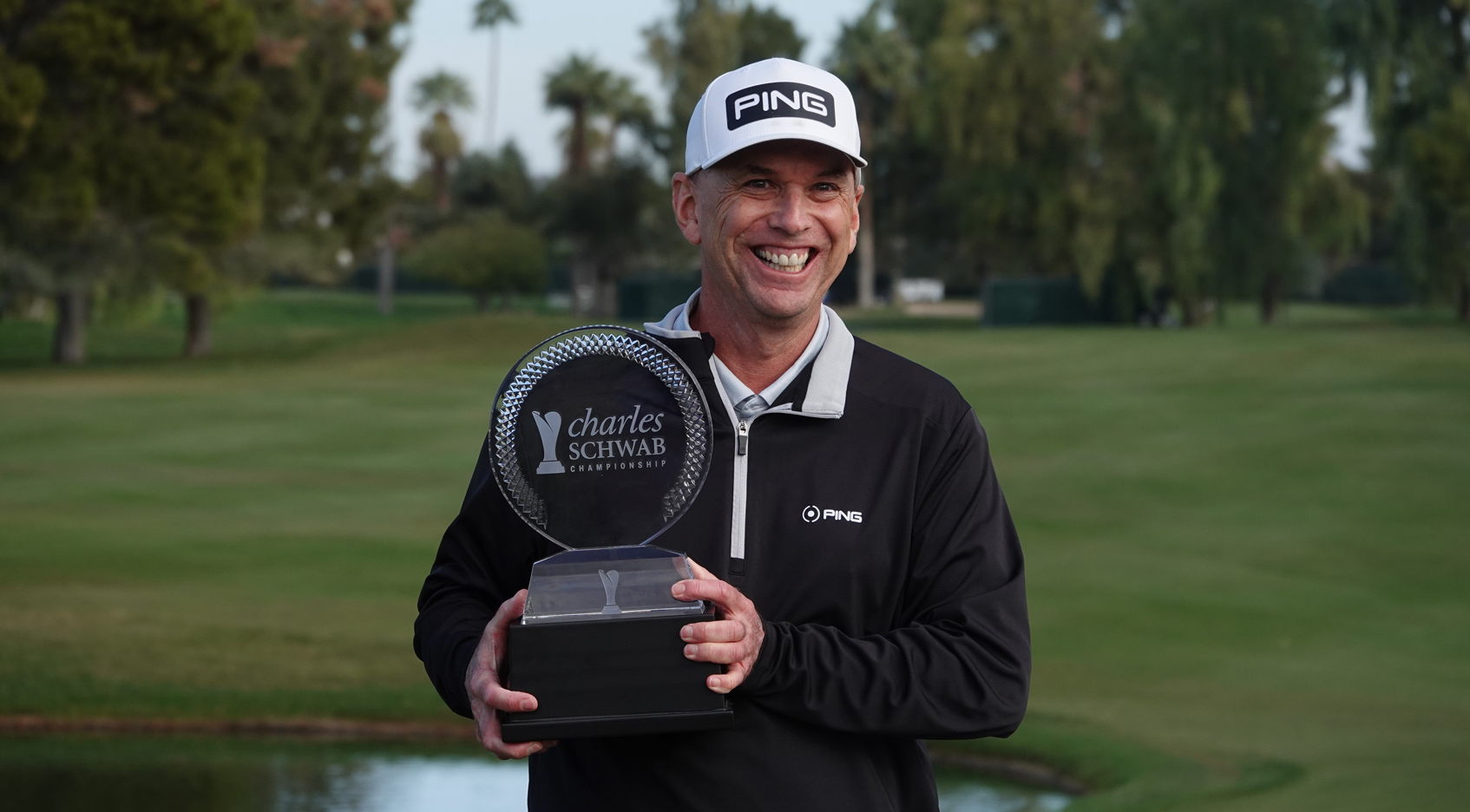 Kevin Sutherland needed an extra day and nine more holes, but the won the Charles Schwab Cup Championship for the second time in four years.

Sutherland, from Sacramento and Fresno State, sank a four-foot birdie putt on the ninth playoff hole to turn back Paul Broadhurst of England in a Monday finish at Phoenix Country Club in Phoenix, Ariz.

“I love this place,” said Sutherland, whose 2017 in Phoenix victory gave him the Charles Schwab Cup. “It kind of reminds me of a golf course I play in Sacramento a little bit. It’s kind of this perfect square golf course kind of in the middle of town and it has a lot of similarities. So it kind of feels a little bit like home a little bit. And I’ve played well here, so it makes you feel even better.

“I hit a 7‑iron (on the last playoff hole) that I’ll remember a long time. I can’t hit it any better and it happened to get in there nice and close underneath the hole, which made the putt a lot easier.”

The Charles Schwab Cup Championship is the final event of the PGA Tour Champions season and usually determines the winner of the Charles Schwab Cup, but because so many tournaments were canceled this year because of the Coronavirus pandemic, the points will carry over to next season and the next Cup winner will be crowned at the end of the 2021 season.

Sutherland and Broadhurst finished in a tie on Sunday evening and both made pars on six straight playoff holes, with Sutherland lipping out a 20-foot birdie putt on the fifth extra hole and Broadhurst barely missing a 20-footer for birdie on the next hole.

Three of Sutherland’s four PGA Tour Champions title have come in playoffs, including a victory over Scott Parel on the seventh extra hole of the 2019 Rapiscan Systems Classic.

Broadhurst, who has won 18 times as a pro including two majors on the PGA Tour Champions, closed with a bogey-free, 8-under-par 63 with five birdies on the first eight holes and three more in the last six to catch Sutherland at 15-under 198.

Sutherland, who started with 65-64 to take a five-stroke lead into the final round, finished with a 69 that included a 30-foot birdie putt on the 18th hole to force the playoff.

Woody Austin closed with a bogey-free 65 to finish three strokes back in third, followed another two shots behind by Wes Short Jr., who wound up at 69.

Bernhard Langer of Germany, who has 41 victories on the PGA Tour Champions but has never won the Charles Schwab Cup Championship, made five birdies on the front nine in a bogey-free 64 to wind up six down in a tie for fifth with Retief Goosen of South Africa (65), Fred Couples (66), Ernie Els of South Africa (66) and Glen Day (66).

Paul Goydos of Coto de Caza and Long Beach State birdied five of the first seven holes and shot 66 to finish one more down in a tie for 10th with Corey Pavin of Oxnard and UCLA, who had a 69, and Tom Lehman, once a teaching pro at Wood Ranch in Simi Valley, who came in at 70.