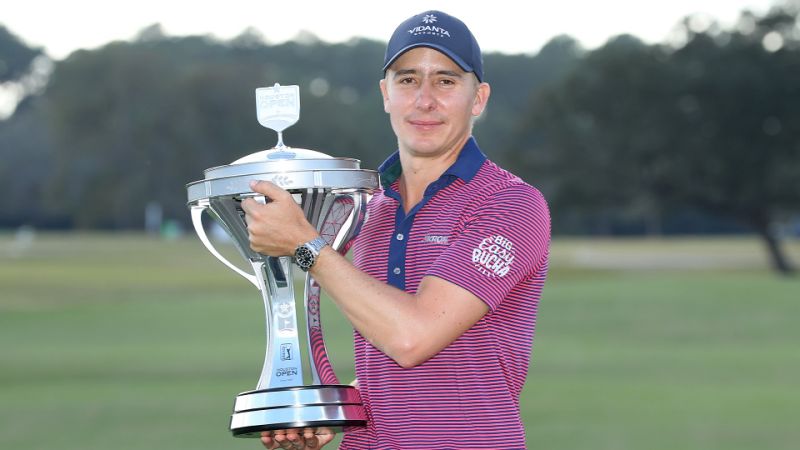 All Carlos Ortiz had to do to win for the first time on the PGA Tour was hold off top-ranked Dustin Johnson.

The 29-year-old from Mexico sank a 22-foot birdie putt on the last hole to cap a bogey-free, 5-under-par 65 that gave him a two-stroke victory over Johnson and Hideki Matsuyama of Japan in the Vivint Houston Open at Memorial Park Golf Course in Houston.

Ortiz became the third player from Mexico to win on the PGA Tour and the first since Victor Regelado won the Quad Cities Open in 1978.

“It feels awesome,” said Ortiz, who grew up in Guadalajara and played University of North Texas. “This is like my second home. There was a bunch of people cheering for me, Latinos and Texans. I’m thankful for all of them.

“I’m really happy with the way I played. You have to hit fairways and green on this course, and I did that, in addition to making some putts. It was great to make that putt on the last hole. It’s been a while since I won, and it feels so good.”

Ortiz, whose only previous pro victories were three titles in 2014 on what is now the Web.com Tour, had three birdies on the front nine and added two more on the last three holes to finish with a total of 13-under 267.

Johnson, playing for the first time since recovering from Covid-19, was tied for the lead until Ortiz made those last two bogeys and warmed up for the Masters this week by playing the weekend in 65-65, while Matsuyama tied the course record set earlier in the day with a bogey-free 63.

Talor Gooch also posted a bogey-free 63 and was four shots back in solo third, while former No. 1 Brooks Koepka continued his comeback from injuries by making five birdies on the front nine in a 65 and wound up five behind in a tie for fifth with Sepp Straka of Austria, who finished at 69.

Tenth-ranked Tyrrell Hatton of England closed with a 65 and was one more down in a tie for seventh with Mackenzie Hughes of Canada, who birdied four of the first six holes in yet another 63, Jason Day of Australia, who shot 71, and third-round leader Sam Burns, who struggled to a 72.

Adam Scott of Australia, the 2007 Houston Open champion, tied for 32nd after a 68, while defending champion Lanto Griffin tied for 58th after a 70.