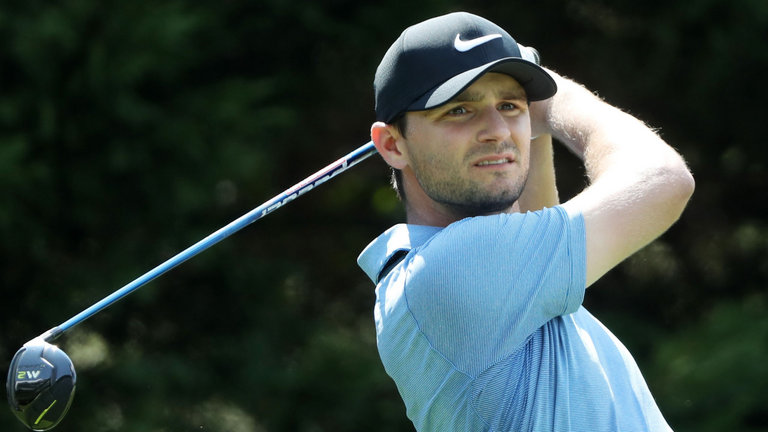 Kyle Stanley played like a veteran even though it was his first start in the Tour Championship.

Stanley, who is 22nd in the FedExCup standings, shot 6-under-par 64 to take a two-stroke lead over Webb Simpson, Daniel Berger, Brooks Koepka and Paul Casey of England after one round at East Lake Golf Club in Atlanta.

“It’s my first time here and I really like the course,” said Stanley, who captured the Quicken Loans National this season for his second PGA Tour victory. “It’s a really good test and is in great shape.

“I just tried to keep the ball in front of me and hit fairways because the Bermuda rough is hart to play out of if you hit it in there. We put together a good game plan, I got comfortable and I’m happy with the way I played and the position I’m in.”

Stanley collected seven birdies, including four in a row through No. 6 and had his only bogey on the eighth hole.

Simpson holed a seven-foot eagle putt on the sixth hole and had a tap-in birdie on the last to complete his 66, which Berger matched with a 14-foot eagle putt at No. 18, while Koepka and Casey each birdied the final hole.

Points leader Jordan Spieth, who captured the 2015 FedExCup, opened with a 67 and is tied for sixth with Justin Thomas, No. 2 in the standings, Jon Rahm of Spain, Jason Dufner, Russell Henley and Gary Woodland.

Top-ranked Dustin Johnson, No. 3 in the point standings, is tied for 11th at 68.