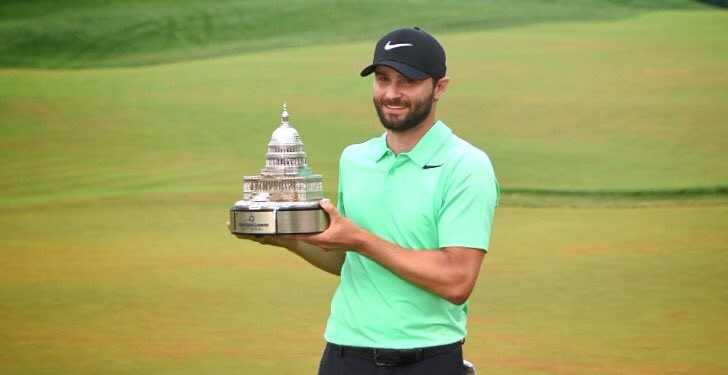 Kyle Stanley last won five years ago and for Charles Howell III it had been 10, so something had to give.

Stanley sank a five-foot par putt on the first playoff hole to turn back Howell and claim his second victory on the PGA Tour in the Quicken Loans National at TPC Potomac at Avenel Farm in Potomac, Md.

“It’s a relief and it feels special,” said Stanley, whose other victory came in the 2012 Waste Management Phoenix Open. “It means a lot, especially to win on this golf course, but it’s difficult to put into words.

“It’s a lot to digest, but it means a lot to me and my team. A lot of cool things are coming, but I have to continue to work hard and keep doing all the things that I’ve been doing.”

Stanley and Howell both shot 4-under-par 66 in the final round to finish at 7-under 273, with Howell’s 21-foot birdie putt on the final hole of regulation hitting the left edge of the hole but failing to fall.

Both players missed the fairway and green on the playoff hole, and Howell, playing for the first time in nine weeks because of a rib injury, missed his 11-foot par putt before Stanley closed out the victory.

“I was extremely rusty, but I was able to control my golf ball pretty well,” said Howell, who has two PGA Tour victories, the last coming in the 2007 Nissan Open at Riviera. “It was very difficult (during his layoff), because all I could do was putt and ride the stationary bike.

“I could have won the event, but it was great to be in it. It was a long nine weeks, but now I’m excited to go back to work and also try to stay healthy.”

Ninth-ranked Rickie Fowler carded a 65 but hit his tee shot into the water and made a double bogey-6 on the 14th hole to wind up two strokes behind in a tie for third with Martin Laird of Scotland, who made his only bogey on the last hole of a 67.

Marc Leishman of Australia carded a 66 and wound up three back in a tie for fifth with Ben Martin (65), Keegan Bradley (67), Johnson Wagner (68), Sung Kang (70) of South Korea, Spencer Levin (71) of Elk Grove, Curtis Luck (70) of Australia and David Lingmerth (73) of Sweden, who led after each of the first three rounds.

Defending champion Billy Hurley III finished with a 73 and tied for 63rd.