Stacy wins with birdie on 18 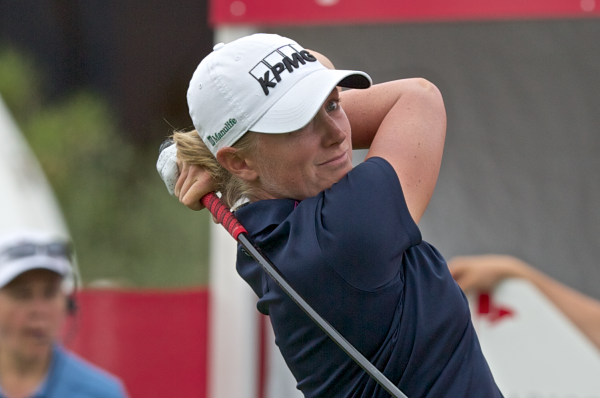 Stacy Lewis holed a seven-foot birdie putt on the final hole to cap at 6-under-par 65 and win the Walmart Northwest Arkansas Championship by one stroke over Cristie Kerr, Angela Stanford and Lydia Ko of New Zealand at Pinnacle Country Club in Rogers, Ark.

Lewis, No. 1 in the Rolex Women’s World Golf Rankings, claimed her 11th victory on the LPGA Tour, including the third this season, and will defend her title in the Ricoh Women’s British Open in two weeks at Royal Birkdale.

“It’s so hard for me to play here,” said Lewis, the local favorite from the University of Arkansas. “I was more nervous than I was last week at the U.S. (Women’s) Open. But the crowd was just unbelievable today.

“It’s just special to win here, but I was able to pull off the shot and the putt on the final hole. It feels great to be able to make a birdie like that when you need one. … It’s so nice to go to the British after winning this one.”

Ko, the 17-year-old LPGA Tour rookie, closed with a bogey-free 65, while Kerr and Stanford each finished with 67s.

So Yeon Ryu shot 69 despite a double-bogey 5 on the sixth hole and wound up two shots back in fifth, while Suzann Pettersen of Norway finished with a 69 and tied for sixth with Chella Choi of South Korea, whose 69 included a hole in one at No. 6.

Michelle Wie, the 36-hole leader who was coming off her victory in the U.S. Women’s Open at Pinehurst No. 2 a week earlier, ran out of gas and struggled to a 73 that left her in a tie for eighth.